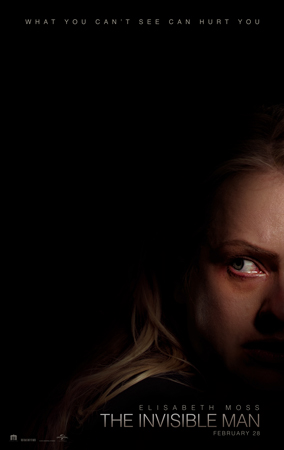 Modern journalists often get criticized for burying the lead (main idea) in their articles.

Therefore, let’s cut to the chase.

“The Invisible Man” is unprecedented, unique, shocking and is a film that should motivate Hollywood to think outside of the box instead of giving moviegoers the same formulaic approach to a thriller.

In “The Invisible Man,” Cecilia (Elisabeth Moss, “Chuck”) has had enough.

She is tired of her abusive husband, Adrian (Oliver-Jackson Cohen).

She is tired of being told what to do, what to say and what to think.

She is tired of having her architectural dreams placed on the backburner so that her husband can thrive in the world of optics technology.

Therefore, while a tired Adrian rests in their spacious and palatial castle of a home, Cecilia outsmarts the smart technology in the home and makes her get away from this dead-end marriage.

Although she escapes the brutal relationship with the help of her sister Alice (Harriet Dyer), Cecilia never truly escapes Adrian mentally.

Cecilia is so terrified of Adrian finding her that she does not even stay with her sister because Adrian obviously knows where she lives.

Despite the fact that Cecilia is safe at James’ house, she still has not managed the courage to venture outside of the house two weeks into her stay with James.

When she does build up the nerve to go to the mailbox she immediately gets spooked by a jogger, dashing back into the comforts of the house.

But when Alice informs Cecilia that Adrian has taken his own life, Cecilia realizes that she has survived the horrors of her brutal marriage.

Furthermore, Cecilia has inherited a fortune to be distributed over the next few years, which will enable her to get her life back on track while helping the people who helped her in her time of need.

But just when she begins to get her life back some strange things start occurring.

While alone at James’ house, Cecilia starts getting the sensation that she is not truly alone.

Things begin to move on their own.

She begins to hear sounds while alone.

Doors start to open on their own.

Blankets begin to disappear off of her bed.

And Cecilia begins seeing footprints even though she does not see a person.

Because of Cecilia’s knowledge of Adrian’s work in the optics profession, she is convinced that he has faked his own death.

She believes Adrian is alive.

However, people just cannot see him.

Furthermore, because Cecilia believes he is invisible she also believes that Adrian is relentlessly stalking her in James’ home and throughout the San Francisco area.

“The Invisible Man” has some similarities to the hit rap song “Mind Playing Tricks” by Geto Boys.

Throughout the song, members of the Geto Boys have crazy encounters with violent and treacherous people.

But at the end of each verse, each member realizes that everyone else is not crazy.

They are the crazy ones experiencing psychotic episodes.

In “The Invisible Man,” Cecilia is sure that Adrian is out to get her despite his suicide getting attention from the press, and the fact that no one has seen him since his suicide.

But how does one explain the strange things happening around her if it is not Adrian stalking her?

On the contrary, how can one explain Cecilia running down the street in terror even though security cameras show no one chasing her and no imminent danger?

She must be cuckoo for Coco Puffs, crazy, insane, deranged.

But sometimes people think geniuses are actually crazy before understanding their ingenuity.

The key is can Cecilia prove her intelligence before what she believes is happening actually does drive her crazy?

Although Hollywood gets blamed for being formulaic and predictable, some predictable adjectives describe the thriller, “The Invisible Man.”

Edge of your seat suspense sums up “The Invisible Man.”

The star of the film by far is Moss.

She is John, Paul and George of The Beatles while everyone else is just Ringo.

Nevertheless, that does not stop the co-stars from shining completely.

Hodge continues to show his seemingly limitless range from playing athletes to rappers and now portraying a cop and single father in a spine-tingling thriller like “The Invisible Man.”

However, Reid understandably does not get the chance to spread her charisma like in previous roles like “A Wrinkle in Time.”

Despite the greatness of “The Invisible Man,” filmmaker Leigh Whannel should have shown moviegoers the violence that Cecilia endured at the hands of Adrian, which motivated her to leave the relationship.

“The Invisible Man” only tells moviegoers about the years of abuse.

Cecilia is already a sympathetic figure in “The Invisible Man.”

However, showing the violence would have made Cecilia more empathetic.

But a thriller as great as “The Invisible Man” does not need much sympathy or empathy at all.

The film just needs movie critics and moviegoers alike to call a spade a spade.

Therefore, make yourself very visible at the movie theater this weekend to see “The Invisible Man.”