‘The Wolverine’ Will Bring More Fans to ‘X-Men’ Franchise 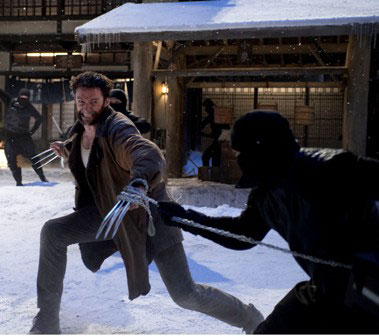 Living forever would be to-die for.  Well, maybe not.

For Logan (aka the Wolverine), living forever means being separated from mortal loved-ones and experiencing some of the worst aspects of human nature on a normal basis.

His superpowers are enviable to those who seek to maintain power, but for someone like him, it is a curse that makes him vulnerable to everyone he comes in contact with.

The Wolverine (Hugh Jackman) suffers from nightmares.  The dark days of his past keep reoccurring no matter how far he goes to distance himself from his previous capers.  The love of his life also haunts him each sleeping hour, as she begs for him to return to her, which is impossible because of his immortality.

One of the Wolverine’s nightmares centers on his experience in captivity during World War II.  He is able to save the life of a Japanese soldier, but when the soldier attempts to repay the Wolverine for his actions, he refuses.

Nevertheless, that soldier, Yashida (Hal Yamanouchi) goes on to become the most powerful man in Japan.  But on his dying bed, he has not forgotten The Wolverine for saving his life, and wants to extend his gratitude to him before he takes his last breath.

Yashida wants to give The Wolverine his wish of mortality by allowing Logan to transfer his powers to his granddaughter Mariko (Tao Okamoto).

It is also Yashida’s wish to transfer ownership of his company to Mariko over the likes of his own son Harada (Will Yun Lee).  Bypassing his own son leads to a deadly battle of power between father, daughter and The Wolverine who vows to protect Mariko.

Many film buffs who are not comic book geeks might think that “The Wolverine” could not possibly peak their interest.  Think again.

Although some might gasp at the violent fighting scenes in “The Wolverine,” the story line is superb and Jackman is excellent in his reprisal of the role of Logan.

One does not have to be an expert on the “X-Men” series to follow the plot line, because although it is an action film, the storyline is totally relatable to the everyday life of the rich and powerful.

Members of powerful families often battle for control over the family fortune, with small slights enough to excommunicate unfaithful family members and exclude them from wills.

Often, powerful patriarchs have to choose who is best to lead their company in the event of their demise, which often means overlooking their own children or those closest to them.  Those perceived slights often lead to jealousy, revenge and retribution.  “The Wolverine” is a microcosm of that reality.

The only criticism of the film is that the violence might be shocking to those unfamiliar with the “X-Men” series and the 3D special effects were not as breathtaking as one would imagine.  A movie that does not even come close to “The Wolverine” in quality like “R.I.P.D.” can boast of extraordinary 3D effects.

Nevertheless, Jackman proves that he is perfect for the role of Logan.  And although, Logan desires to not live in perpetuity, he is born for this role and his performance in “X-Men” films will live on forever.