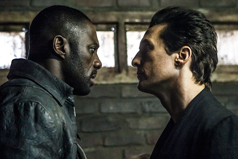 It is not what you say, but how you say it.

It is not what you do, but how you do it.

Hollywood has done the same thing over and over for decades when it comes to summer blockbuster films.

A bad guy or evil force threatens to destroy the world and it is up to the good guys to thwart those efforts and save mankind from utter destruction.

The aforementioned storyline has seen the big screen probably a thousand times.

Therefore, the way the filmmakers present that storyline determines whether they have an epic success or an epic flop.

The latest version of that ever-popular storyline is “The Dark Tower,” and the filmmakers can take a sigh of relief because their version of good guys versus bad guys is an epic success.

Even before the movie industry became such a titan, stories of good versus evil existed as far back as biblical times.

In the Bible, God held the world together through His grace despite the devil trying his best to remove God’s protection from the people on Earth.

In “The Dark Tower,” the tower is what protects the world from utter destruction and from being overpowered by evil and demonic forces.

The Man in Black (Matthew McConaughey) is a sorcerer who has the power of life and death in his hands.

All he has to do is tell someone to stop breathing and that person instantly dies.

However, he still cannot topple the dark tower, which would allow his demonic henchmen to have total control of the world.

The Man in Black dedicates much of his time to kidnapping children from Earth who have the “shine,” which are psychic powers that are strong enough to destroy the tower if used incorrectly.

Many children have the shine, but none have more shine than Jake Chambers (Tom Taylor).

While other people in his hometown of New York City just think that the “Big Apple” is experiencing an exorbitant amount of earthquakes, Jake knows something more sinister is at play.

He sees visions of Roland/The Gunslinger and The Man in Black/Walter and the significance of the dark tower.

When clinical psychologists come to take Jake away, because his family and friends think he is bad s*** crazy, Jake runs away and discovers the true meaning behind his visions.

After he meets the Gunslinger from his dreams, he has to convince him to join him to help take down The Man in Black once and for all, and save the planet from devastation.

Even with the brilliance of Elba and McConaughey, the youngsters Jake (Taylor) and his friend Timmy (Michael Barbieri) steal the show from the more seasoned and well-known veterans.

“The Lost Tower” is a very good and fun summer film.

However, the same ole Hollywood storyline of good versus evil stops it from being an excellent flick.