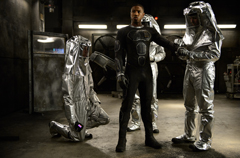 What’s in a Name?

Dr. Dre is not really a doctor.  Neither is Dr. J for that matter.

Although he recently filed for bankruptcy, rapper/actor 50 Cent is worth much more than a half dollar.

And New Kids on the Block have not been kids in 25 years.

Reed Richards (Miles Teller) has been eccentric since he was a youngster.

While some of his classmates want to follow in the footsteps of New York Giants quarterback Eli Manning, Reed wants to conquer outer space instead of conquering the Super Bowl like many young boys his age.

At a school career day in 2007, he states that he wants to figure out how to transport human beings to space and back through a machine called the bio-matter shuttle.

Although his teacher believes his dreams are unrealistic, Reed explains to him that scientists have already transported objects to outer space, so why is transporting people unrealistic?

Despite being misunderstood by his parents and classmates, he befriends Ben Grimm (Jamie Bell), a classmate from a dysfunctional home, but one that owns a junkyard.

The junkyard has all of the things Ben needs to create his bio-matter shuttle.

Throughout their childhood, Reed and Ben spend hours in Reed’s garage working on their project.

In the process, they knock out the lights in the neighborhood, destroy a school basketball backboard at a science fair and put the entire planet in peril.

Nevertheless, Reed’s ingenuity captures the attention of Dr. Franklin Storm (Reg E. Cathey, “House of Cards”) who gives Reed a full scholarship to an institute that is studying human transporting just like him.

With the help of Sue (Kate Mara, “House of Cards”), Victor (Toby Kebbell) and Johnny (Michael B. Jordan), the four finally figure out the art of human transporting.

However, when the government becomes aware of their discovery, they want experienced astronauts from NASA to take the first steps on the new planet.

Sensing that their Buzz Aldrin moment is being taken away from them, they transport themselves to the new planet without the consent of their superiors.

Ultimately, their unsanctioned trip leads to serious supernatural powers, but also some serious consequences as well.

“Fantastic Four” has some cool visuals, as one would expect from the Marvel brand.

The scene where Earth is in danger of being transported to space is especially cool.

However, “Fantastic Four” suffers from a dull story line and average acting.

Not even the super-talented Jordan can save the film from the realm of mediocrity.

Fortunately for “House of Cards” fans, some of the best actors from the series like Mara (Zoe Barnes) and Cathey (Freddy) can be seen in “Fantastic Four.”

The film will help the two “House of Cards” stars, along with Jordan, reach a more mainstream audience, but their performances will not reveal the depths of their talent.

Their acting ability is definitely fantastic in other work, but “Fantastic Four” is more of a misnomer and not the right project to broaden their name recognition.