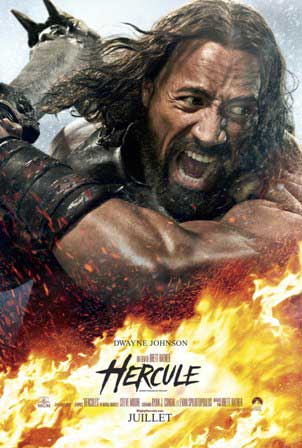 Half Man, Half Amazing

Legend has it that Hercules is part man and part god.

The illegitimate son of Zeus, Hercules must endure the fact that he is not really a god and not really a human.

Zeus’ wife vows to kill him and his mother because of the king of the gods’ infidelity, and he must survive 12 arduous labors in order to gain the respect that he has been denied.

Thanks to his storytelling nephew, the tales of his labors spread throughout Greece, and the king of Thrace and his daughter hire Hercules (Dwayne Johnson) to fend off a brutal takeover at the hands of Rhesus (Tobias Santelmann) and his army.

When he arrives at Thrace to command their lowly army, what awaits him and his lieutenants are not hardened warriors, but mere farmers who have found it impossible to protect their land from Rhesus.

Lord Cotys (John Hurt) is so persistent about attacking Rhesus that he sends Hercules and his new army of farmers to battle too quickly, resulting in catastrophe for many of the new soldiers.

Many begin to question whether Hercules is more myth than immortal.  Legend has it that he murdered his wife and children and therefore cannot be the supreme being that others claim him to be.

When his legend is questioned, he has to determine whether he will stand up for good or flee from evil.

The story of Hercules has been told countless times in the past with varying results, but this version of “Hercules” is one of the best thus far.

The battle scenes in the film are creative and climatic because of the brilliant battle tactics of the popular demigod.

While 3-D technology can be overused in modern action films, “Hercules” uses it brilliantly, which places moviegoers directly in the middle of the battles.

The mountainous terrain in some of the battle scenes is simply breathtaking and virtually all of the camera shots are perfect.

Additionally, the coliseum scene in which Hercules is introduced to the people of Thrace is another magnificent shot.

Director Brett Ratner also is smart enough to give the background of how the legend of Hercules was born for those who are not that knowledgeable on the stories of mythology.

Although action movies are not known for good acting, Johnson does a good job of embodying the demigod.  He has the perfect demeanor and authority in his voice to command the respect that an immortal deserves.

Furthermore, the characters showcase a good combination of strength and charm giving them the perfect balance.

“Hercules” can only be faulted because one character’s fate is totally predictable and similar stories with similar action scenes have been told countless times.

However, Ratner’s film does all of these things just a little bit better than all of its predecessors.

With films like “Hercules,” Johnson’s legend as an action star continues to grow as well.

As he continues his ascent to becoming a bona fide action star for the ages, he is proving there is more substance to his story than just myth, just like the demigod he portrays so brilliantly.