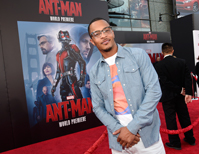 Actor/rapper Tip “T.I.” Harris poses at the premiere of “Ant-Man” at The Dolby Theatre on June 29 in Los Angeles (Photo Credit: Chris Pizzello/Invision/AP).

No Longer a Skeptic

Call me a skeptic.

Paul Rudd already had a fan in Todd A. Smith, but I doubted whether the actor known for comedies like “The 40-Year-Old Virgin,” “Role Models” and “Anchorman 2: The Legend Continues” could muster the requisite swagger to pull off the lead role in a superhero movie like “Ant-Man.”

Con-man Scott Lang has a Masters degree in Electrical Engineering but prefers the criminal lifestyle instead.

He has just been released from prison on burglary charges, but loses visitation rights with his daughter Cassie (Abby Ryder Fortson) because he cannot afford child support payments.

Furthermore, he is forced to take a demeaning job at Baskin-Robbins and has to share an apartment with former cellmate Luis (Michael Pena) and his partners in crime Dave (T.I.) and Kurt (David Dastmalchian).

His company Pym Tech is a leader in scientific advancements, but when his protégés begin using his tutelage for evil reasons he retires from the company in 1989.

Even his daughter Hope (Evangeline Lilly) is so upset with him for not playing ball with their colleagues that the two become estranged for many years.

However, when Hope finally realizes that Hank’s successor Darren Cross (Corey Stoll, “House of Cards”) has evil intentions for Hank’s formula which shrinks human beings into the size of ants, Hope teams up with her father to find the perfect person to be Ant-Man.

Hank’s initial purpose behind the technology was to protect the world from evil, not knowing that the evil that the world needed protection from was right under his nose for many years.

Because of Scott’s burglary talents, Hank sees him as the perfect candidate to become Ant-Man.

Darren envisions the shrinking formula as a new war tactic that will allow soldiers to sneak up on their enemies, since it is hard to see them, and inflict extreme punishment on them.

Not only does the formula shrink an individual, but it also increases their strength significantly.

It is up to Scott to sneak into the facilities of the tech company and steal the shrinking Yellowjacket suit that Darren has been working on and disrupt his entire evil operation.

It combines 3-D technology, different realms, the fantastic action scenes and the superb comedic timing of Rudd into one wonderful motion picture.

All of the actors like Rudd, Pena, and T.I. are allowed to be themselves while the film is still able to stay true to a Marvel superhero blockbuster.

Even in the beginning of “Ant-Man” when it drags getting to the nitty-gritty, the comedy of Rudd and Pena makes one forget that they have not seen one superhero fight yet.

The film is an epic achievement for Marvel and for Rudd.

Marvel has a new film to take the superhero throne for the time being because another film will probably come soon to snatch the throne.

Unfortunately, heavy is the head that wears the crown.

But for now the crown is strictly on the head of Rudd or Ant-Man as he is now called.