Film Review: ‘Guardians of the Galaxy’ Another Hit for Marvel 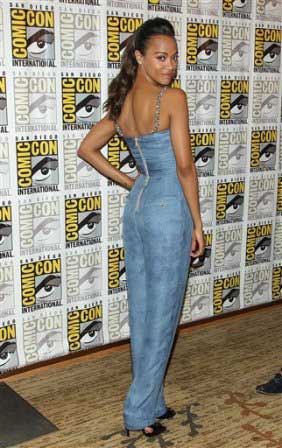 Another Hit for Marvel Comics

Another Marvel Comics creation shown on the big screen will not disappoint audiences.

“Guardians of the Galaxy” was delightfully entertaining and much to my surprise an excellent movie.

Starring Chris Pratt, who’s best known for his television roles such as Andy Dwyer in “Parks and Recreation” and Bright Abbott in “Everwood” represented the charming, heroic and funny character of Peter Quill a.k.a. “Star Lord” exquisitely.

Alongside Peter Quill is the Green, hot tempered, tough and takes no prisoners “Gamora” played by Zoe Saldana, who finds herself partnering with “Star Lord” on her quest to double cross Thanos to keep the galaxy safe from total annulation.

The self-proclaimed “Sci-fi geek who happens to dress nice” is no stranger to playing a strong alien female role who can kick butt.

In “Avatar” she played a Blue strong-willed alien named Neytiri and she also reprised the role of Nyota Uhura in “Star Trek.”

Saldana pulls out all the punches “literally” in this movie and keeps the audience guessing if she can be trusted among the “Misfit Five.”

Rounding out the Guardians is WWE champion Dave Bautista who plays “Drax the Destroyer” on a quest to seek revenge for the senseless murders of his wife and daughter. “Rocket,” a genetically engineered raccoon who is a bounty hunter and mercenary and is a master of weapons and battle tactics, (also the comic relief) voiced by “The Hangover” franchise star Bradley Cooper.  Finally, rounding out the last of the “Misfit Five” is the loveably “Groot” a.k.a. “I am Groot” voiced by Vin Diesel, a tree-like humanoid who is Rocket’s accomplice.

Although Peter Quill is the leading man, “Groot” definitely steals the spotlight with his tender heart and tough exterior!

“Guardians of the Galaxy” even impressed my 16-year-old who had this to say about the movie:

“I thought the movie was good. It was a bit dark seeing how when the bad guy went on a rampage and everyone was getting killed. However, I like the fact that the good guys didn’t knock out every bad guy like they do in every movie or how it wasn’t reserved for the main villain. Good movie (but) don't bring little kids… finally a real movie with actual consequences.”

As the movie ended (not revealing if it was a happy ending or not…) a sequel is on the horizon for the “Guardians of the Galaxy” storyline!

If you are a Marvel Comics fan familiar with the “Guardians” or being introduced for the first time to this group of “unlikely heroes” (present company included), moviegoers can confidently add this to their list of must see movies!

Not sure if “Guardians of the Galaxy” set out to be a blockbuster hit at the movies, however it will definitely surprise movie goers and fans of the Marvel Comic Franchise.  One of the best two hours of entertainment I’ve had in a long time!