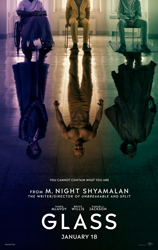 People can be strange.

People can be crazy.

And those qualities that some people have get captured in M. Night Shyamalan’s weird spin on superhero movies, “Glass.”

People have often wondered if every “human being” walking amongst us is a mere mortal man.

Some have said be careful how you treat strangers because you might be entertaining angels.

And others believe that some people are superhuman or superheroes, and are walking the Earth keeping us safe from harm and danger.

No one can be a hero without overcoming a dangerous, violent and treacherous antihero.

But if superheroes and villains are not just fictional characters from comic books, the entire natural order of the universe will change and life as human beings know it will change forever.

In “Glass,” David Dunn (Bruce Willis, “Sin City 2: A Dame to Kill For”) and The Beast (James McAvoy, “Deadpool 2”) believe that they are superheroes or super villains.

While David Dunn believes he is the protector of Philadelphia, psychologists like Dr. Ellie Staple (Sarah Paulson, “Bird Box”) believe that David only suffers from delusions after surviving a train derailment years earlier.


In “Glass,” the residents of Philadelphia have even gone as far as giving David the moniker, The Overseer.

David works in coordination with his son Joseph Dunn (Spencer Treat Clark) in locating the bad guys of the “City of Brotherly Love” and then dishing out street justice as a punishment for their crimes.

Joseph is the only person who has always believed that his father is truly a superhero, which is just pure fiction or an urban myth to the people in “Glass.”

He chooses to protect his dad’s secret while helping him on his daily crusades for justice.

Furthermore, he helps his dad keep up the façade of a simple security expert.

When David goes on his crusades, he simply refers to it as a walk.

Somehow, Joseph knows that his father should slow down on his walks because everyone does not appreciate his vigilante style of justice and protection.

On the other hand, The Beast is the alter ego of Kevin Wendell Crumb, a young man who suffered child abuse at the hands of his mother especially after his father died in the same train derailment that David survived.

At times in “Glass,” the young man is Kevin, Patricia, Dennis, Hedwig, Barry, Jade, Orwell, Heinrich, Norma as well as The Beast.

As Kevin battles with his multiple personality disorder in Glass,” the city of Philadelphia battles with someone kidnapping young girls and killing them.

David is determined to find out who is kidnapping these young girls.

His son uses his security skills to inform his dad that the girls and their abductor might be located somewhere near the factory district in Philadelphia.

When David is able to finally find the girls, he is not treated like a hero in the city of Philadelphia.

He is treated like a vigilante and a criminal that must be stopped.

Psychiatrists apprehend David as he fights to free the girls from their abductor.

But when the fight gets out of hand, the psychiatrists subdue David and the kidnapper and imprison them in a mental facility where they try desperately to make the two men realize that superheroes and super villains are just pure, childlike fiction and fantasy.

Throughout their confinement in the psychiatric facility, doctors try to convince the inmates that they believe they are superheroes because they both suffer from some sort of damage to their frontal lobes.

But if others can convince the men that they do possess superpowers, and the world finds out that superheroes really exist, life will change forever, for better or worse.

While in confinement, the so-called super-humans of “Glass” meet a mute patient by the name of Elijah (Samuel L. Jackson, “Chi-Raq”).

Elijah is definitely no superhero.

He cannot even walk or use his limbs properly because of brittle bone disease.

The elderly man is confined to a wheelchair and is totally mute.

He refuses to talk and the only emotion Elijah shows is a nervous twitch that he seems unable to control.

Elijah will not even talk to his mother when she comes to visit.

However, his senior citizen mother remains convinced that Elijah is mentally stable despite what the psychiatrists say.

She believes that he is brilliant and maybe even a genius and just misunderstood by normal and regular people.

Despite not being anyone’s superhero or regular hero for that matter, Elijah has a love for comic book heroes like no other.

Elijah has even gotten his mother into comic books.

She even knows what an origin story is.

Therefore, he is probably on cloud nine to mix and mingle with self-described super-humans when they arrive at the facility.

But will comic book fans be on cloud nine after they watch “Glass?”

To put it bluntly, “Glass” is super weird and super crazy.

However, McAvoy delivers a super performance in “Glass” playing like 50 million characters sometimes all in one scene.

The character Patricia might be moviegoers’ favorite after watching “Glass.”

Although Willis is a great actor and Jackson is one of the best actors of his generation, the star of “Glass” hands down is McAvoy.

Jackson cannot compete with McAvoy unless his performance is nominated in the Best Silent Film category of an awards show, which probably has not existed in close to a century if ever.

The character Elijah can be described as Charlie Chaplin in a silent film with a nervous twitch.

Nevertheless, Elijah is still portrayed by the great Jackson, so even in his silence he commands attention in “Glass.”

And “Glass” also will command attention, if nothing else, for its eccentricities and its bizarre storyline.