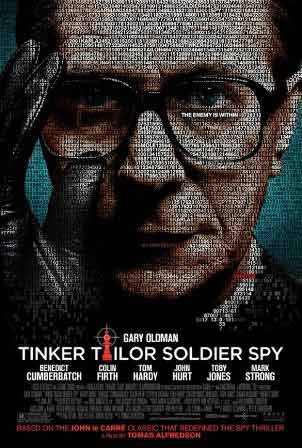 Unlike Any Other Spy Film

The Tinker Tailor Soldier Spy movie promotes itself as being unlike any other spy film out there.  That assertion is completely true.

The Tinker Tailor Soldier Spy movie, set in the early 1970s during the Cold War, focuses on the British Secret Intelligence Service, known as “The Circus,” and the possibility that there is a double agent within the ranks, who is leaking British secrets to the Soviet Union.

Control (John Hurt) is suspicious that “The Circus” has been infiltrated and he initiates a mission in Budapest, Hungary that goes awry, resulting in the shooting of Jim Prideaux (Mark Strong), and he is forced to retire from the service.

Another casualty of the failed Budapest mission is George Smiley (Gary Oldman), but he reluctantly comes out of semi-retirement to identify and track the mole.  Nobody, including Smiley, is written off as the possible mole, but the search is eventually narrowed to five men within “The Circus,” who are each given code names, hence the title Tinker Tailor Soldier Spy.

During the Cold War, intelligence gathered on adversaries was crucial, and the possibility of a mole within “The Circus” is very believable to the people within the agency.  The Soviets send fake informants to England, to throw the British secret intelligence service off the scent of the real informants.

What makes the Tinker Tailor Soldier Spy movie extremely good is that it requires a keen sense of detail.  It is definitely not the type of film that you can take a concession stand break and still appreciate the film.  It will have you at the edge of your seat as you become part of the investigation, along with Smiley and Peter (Benedict Cumberbatch).

Smiley and Peter initially rely on Ricki Tarr for intelligence in their attempt to catch the mole.  He stumbles upon information that will expose the mole, but his Soviet sources mysteriously disappear just as it appears that they will expose the informant within “The Circus.”

The only thing that keeps the Tinker Tailor Soldier Spy movie from being a great film is that the men associated with Operation Witchcraft (Percy Alleline, Bill Haydon, Roy Bland and Toby Esterhase) appear very suspicious from the outset and audience members will automatically zero in on them as the potential moles.  Furthermore, it will take more than one trip to the theater to fully appreciate the entire film, which will work to the advantage of the Tinker Tailor Soldier Spy movie and its producers.

However, if the long lines waiting to see the Tinker Tailor Soldier Spy movie pre-screenings are any indication, the producers have a future classic spy film on their hands and audience members will be more than satisfied with the latest addition to the spy film genre.