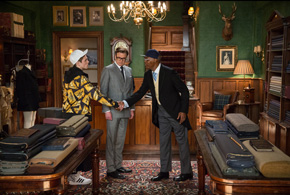 Do you remember RegalMag.com’s movie review for “Dumber and Dumber To?”

In that review, we told our readers that not all movies should be taken seriously, and it is OK to act silly sometimes for no reason and enjoy others with the same mentality.

The kingsman are the current knights.  The kingsman are a super secret spy organization charged with being chivalrous soldiers standing up for what’s right in the world.

While serving in the Middle East in 1997, Lancelot (Jack Davenport) saves the life of his colleague and friend Harry (Colin Firth) during an attempted suicide bombing.

When Lancelot is murdered trying to rescue a distinguished professor, Harry vows to be a knight in shining armor for his young son Eggsy (Taron Edgerton) who has practically given up on life after his stepfather’s abuse leads him and his mother towards a downward spiral.

Despite his run-ins with the law, Harry sees the potential in Eggsy and recruits him to become a kingsman.

Simultaneously, Valentine (Samuel L. Jackson) is recruiting the entire world to support his cause of population control, which he believes is responsible for the climate change that is placing the Earth in peril.

The best part of “Kingsman: The Secret Service” is Jackson’s portrayal of the tongue tied, hip-hop clothes wearing evil genius who is a threat to all mankind with his new SIM cards that he is giving to people for free.

If the Academy Awards ever gave out an award for Best Lisp in a Supporting Role Jackson’s role in “Kingsman: The Secret Service” would definitely get nominated.

He would only fall short to Cedric the Entertainer’s performance in “Kingdom Come.”

(We at RegalMag.com offer our thincere (sincere) apology to anyone offended by the above paragraph.  Regardless, it’s hilarious.  Stop being tho (so) thensitive (sensitive).

Furthermore, Edgerton did a good job as well and was able to go toe-to-toe with talents such as Jackson and Firth.

But besides some sporadic laughs, “Kingsman: The Secret Service” seems a bit juvenile even for a film based on a comic book.

Luckily, fellas will be distracted a little because of the beauty of Gazelle (Sofia Bouetella) despite her “tank-tank” (as Katt Williams would say) attributes in this film.

“Kingsman: The Secret Service” is not a waste of time, but it’s storyline is so far-fetched that it is difficult to fully get engulfed in.

However, the measure of a real man is whether he can admit when he is wrong.

Although a few short months ago I felt it was totally OK to be silly for no reason, I now know that one can be too silly sometimes.  That silliness leads to this film just being an average film despite the talented cast.