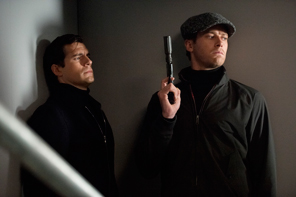 Movie buffs often marvel at the ingenuity of great storytellers.

Adequate storytelling does not just center on the plot and the characters, but the dialogue and nuances of the characters are what separate the pretenders from the contenders.

But the dialogue, especially that of CIA agent Napoleon Solo (Henry Cavill) is especially clever, intelligent, sarcastic and smooth, which will surely make his character one of the most popular in a series of popular protagonist in spy films like James Bond, Jason Bourne (“The Bourne Identity”) and Ethan Hunt (“Mission Impossible”).

Udo begins working on a nuclear weapon for the United States but when he becomes affiliated with a nefarious company, the whole world is in danger of nuclear disaster.

Initially adversaries, Solo has to team up with KGB spy Illya (Armie Hammer) to rescue Udo from the evil Roman company he now works for and save the world from a nuclear explosion.

In order to prove to those in Rome that they are not spies but regular citizens visiting the Italian city, Illya must portray a Russian architect while Gaby pretends to be his German fiancé.

The trio must complete their mission while working alongside former enemies, making it just as difficult to trust new allies, as it is to trust the clear enemy.

Guy Ritchie’s writing in “The Man from U.N.C.L.E.” is simply exquisite.

He takes a formulaic spy story and turns it into something memorable, combining a sarcastic brand of comedy, an uneasy relationship between Solo and Illyah, and the typical espionage plot into one storyline.

In the TV series, “The agents of U.N.C.L.E. (The United Network Command for Law Enforcement) battle the evil forces of THRUSH…Robert Vaughn and David McCallum star as the two-man American and Russian team in the gadget-laced spy series, which ran from 1964-1968.

“Thwarting THRUSH’s efforts to take over the globe keeps Napoleon Solo (Robert Vaughn) and Illyah Kuryakin (David McCallum) on their toes, and the show employs its fair share of tongue in cheek humor. ‘The Man from U.N.C.L.E.’ remains a great TV treasure from the height of the Cold War era James Bond fascination,” according to metvnetwork.com.

Hammer said he did not watch the original TV version of “The Man from U.N.C.L.E.” because the film is not a carbon copy of the TV series.

Furthermore, even though the film is set during the Cold War, he said it did not come across as a period piece, which is true.

“It’s set in the ‘60s, but it’s like if we took a ‘60s muscle car and built it now with modern suspension and a new engine, and all that, and it looked like a ‘60s movie but had all the international components of a great movie…that’s hopefully what we did,” Hammer told ABC radio.  What they actually did was take an old TV show with and old plot, and through the ingenuity of Ritchie and stellar performances by Hammer and Cavill give moviegoers a much-needed new spin on the espionage film genre.