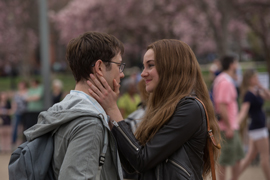 Webster’s Dictionary defines a patriot as someone with “love of and loyalty to one’s country.”

Contrarily, Webster’s Dictionary defines a traitor as “a disloyal person.”

Whether Edward Snowden is a patriot or a traitor depends on how one defines country.

Is a country the people of a nation or the government that represents a nation?

If it is the former, Snowden is a patriot.  If it is the latter, he is probably a traitor.

Unless a person has lived under a rock for the last few years, they know the story of Snowden.

The ex-soldier worked for several contractors for the CIA and NSA.

The future whistleblower was flabbergasted to learn of America’s bulk collection tactics of information from the Internet in the name of fighting terrorism.

What he believed to be a tactic to spy on suspected terrorists was actually an excuse to spy on everyone, foreign and domestic.

If America’s allies overseas ever turned against them, they could use technology to ruin them.

If foreign leaders were hesitant to take a deal with the United States, the country could expose their darkest secrets.

And if the government was ever suspicious of a CIA or NSA operative, they could spy on that person and their loved ones.

While many blamed such far-reaching tactics on President George W. Bush and right-wing conservatives, Snowden is more upset when the liberal President Barack Obama administration increased such surveillance tactics while promising to police it and reduce it.

“Snowden” is worth the price of admission because it goes beyond documentaries like “Citizenfour” and books like “The Snowden Files” by Luke Harding.

It personalizes Snowden and the people close to him in a way that the aforementioned products could not.

Actor Joseph Gordon-Levitt plays Snowden in a dull and intellectual way, which fits more in line with his true personality.

Few would ever describe Snowden as having a large personality.

Many, however, would describe him as having a large love for America, especially after the terrorist attacks of Sept. 11.

His girlfriend Lindsay Mills (Shailene Woodley) is one of the most interesting characters because she gets him to see without the tint of his rose colored glasses.

Like many, Snowden blindly loves his government and views speaking out against the president as disloyal and un-American.

But, is spying on fellow citizens for no reason really American?

Therefore, is exposing that reality to journalists and therefore the world, really going against the values of America?

“Snowden” is a good film.

It is very intellectually intense.

However, the intellectual tech jargon that is necessary to make a film like “Snowden” realistic might go over some people’s heads and become a little boring in spots.

Nevertheless, some of the visuals and graphics that Stone uses are amazing and the lead actor’s understated but highly intelligent performance is very appropriate.

Furthermore, the film “Snowden” provides a better definition for the man that some view as a patriot, while being reviled and seen as a traitor by the rest.