Film Review: ‘Hitman: Agent 47’ Leaves Much to be Desired 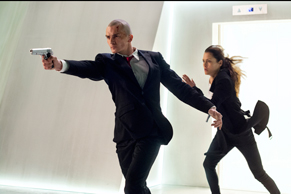 The world revolves around war.  More importantly, success in warfare depends on the people fighting that war.

What if scientists could create the prototypical soldier with the normal DNA of a human being without the conscience?

Sometimes compassion, remorse, love and feelings can prevent human beings from being ruthless.  But if scientists could eliminate all of the aforementioned qualities, they could possibly physically take over the entire planet with merciless killers as soldiers.

Agent 47 (Rupert Friend) has been engineered since conception to be the perfect assassin.

He has enormous strength, incredible intelligence and no feelings or regard for any enemy that gets into his way.

His creator Litvenko (Ciaran Hinds) is the only scientist to find success engineering heartless killers with the assassin program.

Nevertheless, Syndicate International wants to discover all of Litvenko’s secrets so that they can produce an army of assassins that will allow them to conquer the globe.

Syndicate International believes if they can make contact with Katia (Hannah Ware) her skills and ingenuity could lead them to Litvenko.

However, they must be able to protect her from the grasp of Agent 47, which is the only obstacle standing in their way in “Hitman: Agent 47.”

The film “Hitman: Agent 47” is not a terrible film, but one which needs to develop more of the backstory of the soldiers engineered by Litvenko.

Through character dialogue and narration, we are told about Litvenko’s experimentation to create the perfect soldier with no feelings or remorse.

However, it would have been better for the filmmakers to show us those experiments instead of telling us.

The action scenes are adequate and Agent 47 is a “Boosie” (the new way of calling someone a bad-you-know-what without using profanity).

Agent 47 and Katia’s ability to anticipate opposition and avoid capture or even death is fascinating.

Katia’s survival skills are so good that she only needs clues like the fact that the scientist she is looking for likes orchids and has asthma in order to narrow down his possible locations.

The filmmakers do a brilliant job of not letting the cat out of the bag too early, which makes it impossible to determine who Katia should trust, 47 or the seemingly good guy John Smith (Zachary Quinto) who says he is out to protect Katia from 47.

But “Hitman: Agent 47” needs more depth to make it a good action film.

The Aleksander Bach-directed film has all of the ingredients to make “Hitman: Agent 47” a decent film, but the filmmakers do not give the film time to marinate into a succulent dish.

An extra 30 minutes worth of script might have been just enough to help the movie reach its maximum potential.

Unfortunately for this film, movies revolve around unique stories.

The story in this film is unique enough to be successful, but not enough of the backstory is shown visually, which would have catapulted the film to another dimension.