Film Review: ‘The Way Back’ Much More Than Basketball Film 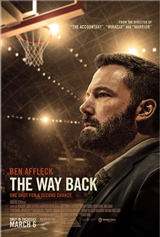 High school and college basketball movies can get a little repetitive.

A basketball coach takes over a program in an inner-city community and transforms their lives for the better, on and off the court like in “Coach Carter.”

Or an open-minded basketball coach goes against the status quo racially and in turn changes how the world of sports sees athletes of color like in “Glory Road.”

So what more can Hollywood accomplish with tales of hoop dreams?

What if the coach has more issues than his players?

In “The Way Back,” Jack Cunningham’s (Ben Affleck, “Gone Girl”) players have their issues at home and in school.

But compared to their coach, the players are literally choirboys at their Catholic high school, Bishop Hayes.

Jackie is a stereotypical male.

He deals with pain and tragedy in his own way.

However, something is wrong with Jack.

He just does not speak on his problems.

His way of handling life’s trials and tribulations is drinking excessively.

You know a person has a serious drinking problem when they literally wake up drinking.

You know a person has a real drinking problem when they drink beer while taking a shower.

You know a person has a real drinking problem when around 20 beers in the refrigerator are not enough for one evening at home.

And when the town knows you by seeing your truck at the local bar on a nightly basis, you guessed it.

You have a serious drinking problem.

That entire diatribe about drinking was just to emphasize how much of a drinking problem Jack has in “The Way Back.”

However, life was not always so bleak for Jack.

While at Bishop Hayes High School in the early to mid 1990s, Jack was the best high school basketball player that many locals had ever seen in their whole lives.

Jack even had a scholarship to University of Kansas.

For those not knowledgeable about college basketball, it does not get much better than the Kansas Jayhawks.

But for some reason things did not work out and Jack never touched a basketball after high school.

And despite now having more of a reputation for alcoholism than athletics, Jack’s reputation on the hardwood still precedes him.

Therefore, when Bishop Hayes’ head basketball coach has a heart attack, and his wife convinces him to give up the clipboard, the head priest at the school knows exactly whom he wants to take over the struggling basketball program.

When Jack finds out about the job offer, he tries practicing his refusal of the job for an entire evening.

Nevertheless, somehow the priest still manages to put a whistle around his neck and get him back in the gym that made him a local legend in the 1990s.

But a lot can change in over 20 years.

When Jack played at Bishop Hayes, they played for championships.

Now, Bishop Hayes has a basketball team in name only.

It is common for high school basketball squads to have a couple of football players on the team.

But Bishop Hayes’ cupboards are so bare that the school has to purge the junior varsity just so the varsity team can scrimmage against one another.

And despite being away from the game for so long, Jack finds out that it is extremely hard to get that love for the game out of your system.

Furthermore, it is hard to quell those competitive juices with a regular nine to five.

Unfortunately, his biggest problem will be competing on the basketball court with mediocre talent and piss poor attitudes.

Jack can fix the attitudes of certain players.

But can Jack fix his own problems too?

Can he bury the demons that lead to his excessive drinking and demonstrative temper?

And if he loses his temper or uses profanity, Jack has to answer to Father Mark Whelan (Jeremy Radin), the official team chaplain, who always looks ready to chastise the rebellious Jack.

But what stereotypical men like Jack need to realize is that no matter what one does to mask the pain of their reality, whether it is through money, job titles or liquor, the pain is still going to be there when everything else fades.

If one does not make it all the way back to their old self, nothing will cover up that void in their life.

Filmmaker Gavin O’Connor (“The Accountant”) who has a great track record with Affleck, casted the perfect actor to play Jack considering the fact that Affleck has struggled with alcoholism too.

The terrific thespian probably did not have to do too much soul-searching or research to bring forth the pain of someone battling to put down the bottle once and for all.

O’Connor even got a lot of minor details right when portraying the construction worker turned high school basketball coach.

Some movies will center on someone doing blue-collar work and their nails look perfectly manicured and they also look perfectly attired as if they have a white-collar job instead.

In “The Way Back,” Jack has dirty nails throughout the movie, which is totally accurate for a man who works construction and takes showers, instead of tub baths.

Who cares about clean nails when all you do with your hands is drink beers anyway?

And who cares just about basketball when “The Way Back” is so much more than that.

The basketball scenes are realistic.

But what is more realistic is the rollercoaster called life and how the downs can even make the ups unimportant.

But with the right mindset and outlook on life, one might be able to make it all the way back.