Review: ‘When the Game Stands Tall’ Doesn’t Stand up to Competition 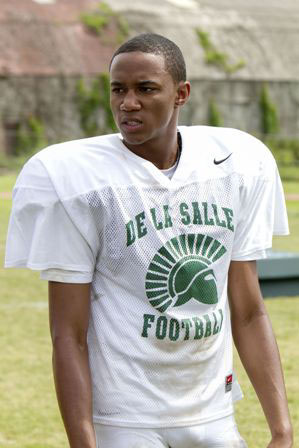 Standing Up to the Competition?

What makes for poignant sports biopics?

Epic recreations of sports triumphs always resonate well with moviegoers, but for filmmaker Thomas Carter (“Coach Carter”) the film has to resonate beyond the field of competition and translate to the real life roller coaster of life.

“When the Game Stands Tall” tells the tale of De La Salle High School’s epic football winning streak that would be totally unbelievable if one did not know it was true.

But like John Wooden at UCLA in the 1960s and 1970s, Coach Bob Ladouceur achieved coaching supremacy not because he focused on winning each game, but because he taught his players how to give the perfect effort in all aspects of life.
After De La Salle’s streak reaches 151 games, Coach Lad (Jim Caviezel) has to deal with an offseason upheaval before trying to continue the streak without the help of his more experienced stars.

Cam (Ser’Darious Blain) and T.K. (Stephan James) receive scholarships to play at the University of Oregon and some of the newer players like Tayshon (Jessie Usher) do not have the discipline required to become a champion.

Cam has to deal with the loss of his mother, the displacement of his younger brother and the senseless murder of his best friend in what is supposed to be the most exciting time of his life.

Furthermore, Coach Lad has to deal with a health scare that sidelines him to begin the season, which sees his once mighty team defeated in the first two games of the season.

The players have to rebound quickly to save their season despite losing the precious streak, and go from boys to men in a short length of time.

“When the Game Stands Tall” is an enjoyable and uplifting film, but not in the same league as Carter’s film “Coach Carter,” or classics “Remember the Titans” and “Hoosiers.”

Carter is absolutely perfect in his depiction of high school football games.  The scenes make one think they are actually watching a gridiron battle and not actors and extras pretending to be blue chip athletes.

The actors like Blain and James also nail the California accent perfectly.  While people in the South often omit syllables, the hardest cats in the hoods of “Cali” often pronounce all of their syllables as if speaking with the King’s English.

“When the Game Stands Tall” also does a great job of accurately portraying the struggles of maintaining the faith when bad things continue to happen to good and righteous people.

Nevertheless, “When the Game Stands Tall” tends to drag a little bit in the beginning before getting to the moral of the story.

And while the film was about boys becoming men by standing up after adversity knocks them to the ground, “When the Game Stands Tall” did not do a good job of showing how the death of one of its star players led to their maturity.

Showing how the player’s family stood tall despite the adversity should have followed those scenes surrounding the death, or it should have been left out of the film.