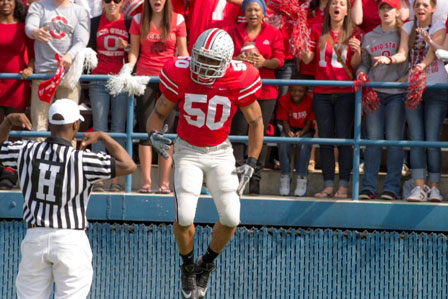 What happens when one assumes?  I will not answer the aforementioned question because this is a PG-rated, faith friendly publication, but “Draft Day” epitomizes why one should not assume.

The film title makes the storyline of the movie obvious.  Because of the countless NFL reality shows and draft specials, was it really necessary to make a film on the draft day experience?  Wouldn’t such a film be ridiculously cheesy?

It could have been, but “Draft Day” is an intelligent, unpredictable look into the life of an NFL executive and how such a demanding job can adversely affect his family life and the careers’ of all of his colleagues.

The city of Cleveland is desperate for a winner.  Art Modell moved the original Cleveland Browns to Baltimore taking with him memories of the great Jim Brown and Bernie Kosar.  To make matters worse, the Baltimore Ravens won a Super Bowl soon after leaving Cleveland standing alone at the altar.

Although he is not mentioned, probably because Clevelanders want him back in a Cavaliers jersey, LeBron James channeled his inner Modell when he took his talents to South Beach and joined the Miami Heat.

Browns GM Sonny Weaver, Jr. (Kevin Costner) desperately wants to give Cleveland a championship of their own.  It was his initial dream to construct a team talented enough to get his father, and Browns coach, the championship ring he so desperately deserved.  But like so many general managers, he is forced to fire a coach that he admires and respects in order to do what is best for the organization.

Sonny needs to make a splash on draft day, but stuck with the seventh overall pick he will not be able to make the “sexy selection” because Heisman Trophy winner Bo Callahan (Josh Pence) will be long gone before the Browns hand in their selection.

Vontae destroyed Bo when Ohio State played Wisconsin with four sacks, and he also has the personality and the maturity that it takes to succeed on the next level.

Florida State running back Ray Jennings (Arian Foster) would love to play for the Cleveland Browns, the team his dad Earl (Terry Crews) played for so many seasons before.

Nevertheless, Sonny goes for the big splash instead of the conservative approach, trading his first round draft picks in the next three drafts for the first selection in the 2014 draft, which was previously held by the Seattle Seahawks.

“Draft Day” goes beyond the formulaic and the cliché’ and gives one a true appreciation of what goes in to running a successful professional sports franchise.

Moviegoers will immediately see NFL executives sleeping and eating at the office and the strain this puts on personal relationships.

The film also crystallizes the difficulty that females like Ali (Jennifer Garner) face trying to break into the all boys club of professional sports and maintain their dignity.

“Draft Day” captures how one day can change the fortunes of a family for generations and how one mistake can cause another to lose a fortune when their stock plummets.

Despite the presence of seasoned performers like Costner, Gardner and Sean Combs, Griffin Newman steals the show as Rick, the quirky and eccentric intern.

The only thing status quo about “Draft Day’ might be the similarities between Bo Callahan and one Johnny “Football” Manziel.  Both are Heisman Trophy winners, both are popular with the ladies and gossip sites and both have had their character and love of football questioned.

Despite being the consensus number one pick, Callahan’ success in the NFL is not certain.

At one time, critics assumed that Joe Montana was too small and Peyton Manning’s arm was not strong enough.  And please do not forget the debacle that was Ryan Leaf, a quarterback that was assumed to be a no-brainer for NFL success.

Assumptions are not gospel; just ask Tom Brady who was the 199th overall pick in 1999.

Those who assumed Brady was below average, made fools out of themselves, and assumptions should be avoided at all costs as it pertains to “Draft Day.”