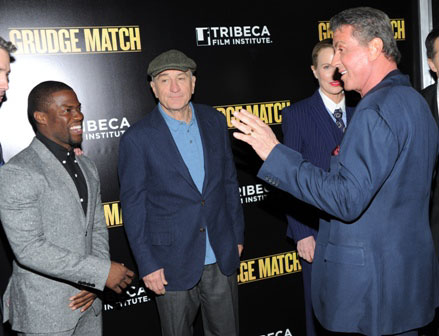 The Legends Live On

Sylvester Stallone and Robert De Niro epitomized the heart of a champion for boxing movie enthusiasts for decades.

De Niro truly captured the essence of Jake LaMotta in the biopic “Raging Bull,” while Stallone won fans over for going the distance in the classic “Rocky” franchise.

At the time of those classic movies, boxing held a special place in our heart, as did the actors.  And while “Grudge Match” has its moments thanks to Kevin Hart and other co-stars, the film does not capture emotions like its predecessors did.

Billy “The Kid” McDonnen (De Niro) remains upset because he still does not believe that Henry “Razor” Sharp (Stallone) beat him at his best.

When he finally had the chance to fight “Razor” at his best, his adversary quit the profession of boxing altogether taking a job at a Pittsburgh plant to make ends meet.

In honor of the 30th anniversary of their epic battles, various media outlets air specials and documentaries on the two former fighters, inspiring Dante, Jr. (Hart) to coax the two out of retirement.

Initially reluctant to take the fight, “Razor” eventually accepts Dante’s offer after he is laid off at the plant and is in need of the money.  Making matters more complicated is the fact that Dante, Sr. swindled “Razor” out of much of his money during his boxing heyday.

What’s initially thought of as a joke turns into one of the most anticipated fights in recent memory.

When Dante, Jr. is unable to find guaranteed money for the fight, he has to urge the fighters to garner attention by promoting the bout themselves.

From butchering the National Anthem to insulting an entire generation of mix martial arts fighters and fans, the two somehow find a way to create the hype that is missing from today’s actual boxing matches.

Their theatrics, such as skydiving, eventually finds willing sponsors like Ben Gay, which is appropriate because both fighters are well into their 60s.

What makes “Grudge Match” work is the tangled web that is weaved within the relationship of “Razor,” “Kid” and the lovely Sally (Kim Basinger).

Sally’s loyalties are clearly biased towards one of the fighters despite sharing family ties with the other.

Bernthal is an up-and-coming star who will definitely be a force to reckon with in the very near future.  His laid-back swagger somehow blends a rare intensity to go with his calm demeanor.

Gray is absolutely adorable in his role as Trey, especially his escapades with the “stolen” automobile and his encounter with a naked lady.

Despite the fact that the former movie screen boxers do not have the heart of a champion anymore, the film does have heart.

At its core, this is a film about reconciliation, forgiveness and family.

The family dynamic is where the actual grudge exists, but the film does a decent job of showing how family and friends can overcome that baggage with a little changing of the heart.