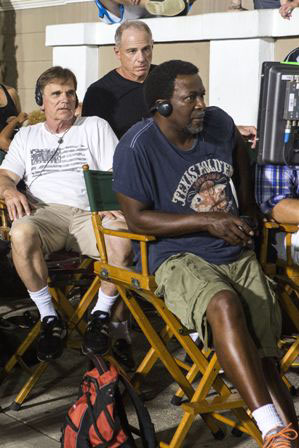 Filmmaker Thomas Carter (front) putting in work on the set of "When the Game Stands Tall" (Photo Credit: Rex Features via AP Images).

The Other Coach Carter

His epic 2005 sports biopic “Coach Carter” starring Samuel L. Jackson perfectly presented the trials and tribulations faced on a daily basis by urban educators and students, and what the have-nots can truly accomplish when surrounded by adults who believe in their dreams and understand their plight.

However, 2005 was not Carter’s first foray into sports entertainment.  He has made a mark in Hollywood by directing episodes of the television cult classic “White Shadow,” while also serving as the executive producer of “Don King: Only in America.”

“Coach” Carter is back on the scene with his latest film “When the Game Stands Tall,” which adds to his already impressive resume of sports movies and biopics.

RegalMag.com recently sat down with Carter to discuss what makes his latest sports film so special.

RM: How do you decide which biopics, specifically sports biopics, to direct?

TC: It’s always about the story.  Whether or not the story and the characters are interesting to me.  In the two sports movies I’ve done, they’ve had compelling lead characters based on real people. “Coach Carter” in basketball and Bob Ladouceur in football and what is that story.  And in the case of both these movies, the story is much more about developing kids and training them as people than it is about the sport itself.  So sport is sort of an excuse to tell a good life story.

RM: What attracted you to the story about De La Salle High School?  What made their story unique besides the long winning streak?

TC: With this story it was difficult in the beginning when I heard about 151-game winning streak.  You ask yourself, “What is the story” because stories and movies are based on conflict and obstacles.  So you kinda go if they win all the time, then what story do you tell?  So, we chose to tell a story where they do run into a loss, where that streak is challenged and you get a chance, then, to examine what really makes this team.  How do they come back from that?  Who are they?  How strong is their character?  And what are the adversities that they face?  That’s what makes this a movie that’s worth seeing, that’s inspiring is watching that struggle and watching these young boys turn into men.

RM: The football scenes look very real.  What are some of the qualities that you look for in actors or extras for sports scenes?

TC: Well, you really have to have football tryouts.  We had a great second unit director, football coordinator named Allan Graf who worked with that unit and we had guys tryout from Texas, Louisiana, across the South.  We found a lot of guys here.  In fact, there’s some guys from Texas, maybe some guys from Houston who might be on that field.  Because guys who had not been able to continue playing after college, maybe didn’t get through college, didn’t make it to the pros or whatever, but really great football players.  So we had real talent on that field.  We had a team of about 47 guys who played all the games interchangeably and then we would bring the actors in.  So they all went through a great training program and all the plays were choreographed.  I storyboarded all those plays, so I designed how they were going to be shot.  So great effort went into that; a lot of physical commitment on the part of everyone.

RM: This film deals with people struggling with their faith.  Hollywood has done a lot of faith-based films in recent years, but not many where a person struggles to understand God’s Will.  How important was it for you to give a realistic depiction of people of faith?

TC: You know I’m so glad you asked that question because I’m not a faith-based person but I did grow up in that environment.  And this movie has elements of it because it’s real to the film.  De La Salle is a Catholic high school.  Bob Ladouceur teaches a religion class so those things come into play in real life.  They don’t coach from any particular religious perspective; they coach from a values perspective.  But if I were going to touch on faith in the movie, I also wanted to touch on the questions of faith, the challenges that people who are looking at a choice for faith are faced with.  Or people who have embraced faith sometimes are presented with.  Those challenges, those questions where things don’t seem to add up.  I think that’s what makes the drama interesting and that’s what makes life interesting is to ask those questions, and so I wanted to do that in the film.

RM: I recently read that the filmmakers of “Remember the Titans” intentionally made Herman Boone (played by Denzel Washington) into a benevolent Martin Luther King type figure and his players said he was a dictator and a jerk.  How accurate is your portrayal of Coach Lad and how much was sensationalized for the film?

TC:  In this movie, our portrayal of Bob Ladouceur is incredibly accurate.  He’s endorsed the film.  His players have endorsed the film.  He is an extraordinary [coach].  You’re not going to have people come back ever and say, “Bob Ladouceur wasn’t so great, he wasn’t so inspirational.  He didn’t help that many kids.”  He did help that many kids.  He is that inspirational.  He is that authentic and that genuine.  This is an extraordinary guy.  I can’t speak to other movies, but in this case I just tried to do honor to that. My biggest wish was that Bob Ladouceur would see this movie and feel that I had honored him appropriately.  He’s my biggest inspiration in making the film.  Having met him and met Terry Eidson, his assistant coach, because they’re very extraordinary in their commitment to their student-athletes and helping them become young men of character and accountability and responsibility.