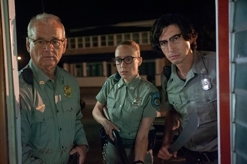 Many adjectives can describe “The Dead Don’t Die.”

“The Dead Don’t Die” definitely goes against the grain, and is something that audiences may have never seen before.

However, that does not always create a great movie despite an all-star cast.

In “The Dead Don’t Die,” something strange is occurring in the small town of Centreville.

The town only has several hundred residents.

Therefore, everyone knows everyone.

And if something out of the ordinary happens, it is usually easy to decipher what occurred.

So when Farmer Miller loses some of his chickens, he immediately suspects Hermit Bob (Tom Waits) of theft.

Centreville is such a tight-knit community that when Police Chief Cliff Robertson (Bill Murray) and Officer Ronnie Peterson (Adam Driver, “BlacKkKlansman”) get shot at by Hermit Bob, they do not even arrest him because Cliff went to middle school with him.

Although Hermit Bob is strange, things in Centreville really get strange on Cliff and Ronnie’s way back to the police station after questioning Hermit Bob about Farmer Miller’s missing chickens.

Although night is approaching on their way back to the police station, the sun is shining bright like it is midday.

Communication between police officers becomes extremely difficult as the walkie-talkies begin to malfunction.

When the officers decide to listen to civilian radio after internal communication devices stop working, the song that pops up on the dial is, “The Dead Don’t Die” by Sturghill Simpson.

Cliff has never heard the song “The Dead Don’t Die.”

However, Ronnie is a fan of the classic song and he informs his boss that it is the theme song to the movie that they are currently appearing in.

News reporters begin reporting that the reason why nightfall has not occurred is because polar fracking has caused the Earth to fall off of its axis.

When the Earth falls off of its axis, it throws everything off, which can represent the end of the world, as people know it.

Everyone from police officers to news reporters to children in a group home can feel that something strange is happening.

In “The Dead Don’t Die,” some people even fear that something catastrophic is happening with the sun refusing to go down at nighttime.

Even Ronnie warns that this is going to end very badly.

Unfortunately, it does not take an entire movie for things to end badly for a couple of women at the town’s diner.

After Hank Thompson (Danny Glover) leaves the diner early because he has to get to his hardware store early the next morning, the women do some last minute cleaning before they lock up for the rest of the night.

However, when Hank returns early the next morning for some breakfast and coffee, he discovers the young ladies mutilated on the diner floor.

Everyone in Centreville suspects that a wild animal, or several wild animals, somehow got into the diner and attacked the women.

The ladies are in such bad shape that it looks like their insides have been eaten out by something or someone.

While the logical explanation is wild animals, as the town residents and some police officer suspect, Ronnie calmly explains to everyone that maybe zombies attacked the women.

Although a zombie attack is absurd in real life, it is not so absurd in a fictional horror or zombie movie.

What is absurd in “The Dead Don’t Die” is the fact that Ronnie remains so calm while everyone in Centreville is frightened out of his or her mind.

While others know something strange is happening in “The Dead Don’t Die,” Ronnie calmly already knows what is happening and what the outcome will be.

Although everyone thinks animals attacked the ladies at the diner, Ronnie asks everyone to consider that zombies could have attacked them.

When hipsters from the big city of Cleveland visit Centreville, Ronnie tells them to remain inside their motel room at night because he believes that the town is in the middle of a zombie takeover.

The travellers, which include Zoe (Selena Gomez), basically laugh Officer Ronnie out of their hotel room.

Nevertheless, when more attacks happen the night after the diner attack, people begin to realize that Ronnie might not be as crazy as he seems to normal, sane people.

Ronnie and Bobby Wiggins (Caleb Landry Jones, “Get Out”) begin telling the frightened residents of Centreville that in order to kill the undead, you have to kill the head.

It is almost immediately understood why Bobby Wiggins would know how to fight off zombies because his gas station is filled with comic books and zombie memorabilia.

However, it is unclear how Ronnie learned so much about killing zombies.

After a rough night of trying to fight off the zombies, Cliff finally asks Ronnie how he knew so much about zombies.

Furthermore, Cliff wants to know why Ronnie is so certain that this will end so badly for the residents of Centreville.

Ronnie informs Cliff that he has read the entire script to the movie that the pair stars in, “The Dead Don’t Die.”

While Cliff (or Murray) only got the scenes that he appears in, Ronnie (or Driver) received the entire script to “The Dead Don’t Die.”

Although rapper RZA from the Wu-Tang Clan only has a brief cameo in “The Dead Don’t Die,” he adds his own unique flavor to the zombie movie.

Instead of working for UPS, RZA’s character Dean works for WUPS.

That’s probably what President Donald Trump wanted his 2016 presidential campaign slogan to be anyway and that’s no fake news.

But fakeness causes “The Dead Don’t Die” to be dead on arrival.

Other adjectives to describe “The Dead Don’t Die” include the following: