Movie Review: ‘Johnny English’ Should Not Have Struck Again 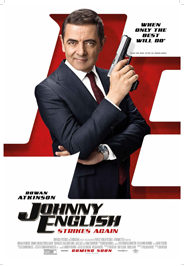 In journalism school, or J-school as those in the profession like to call it, professors teach students when doing movie reviews they should follow a simple format.

A movie review should always begin with a lead.

Next, the review should include a description of the movie without giving too many details away.

Following the description, the movie critic should write what they found intriguing about the movie or its good qualities.

After that, the movie critic should write about what they did not like about the movie.

Lastly, the review should conclude, usually in a manner similar to the lead.

Despite their criticism, the movie critic should never become too harsh in his or her critique.

However, sometimes bluntness and harsh criticism has to win out over walking on eggshells because not much good can be said about the movie.

Unfortunately, “Johnny English Strikes Again” has to get the harsh treatment because the movie is boring and corny.

Thankfully, “Johnny English Strikes Again” is only an hour and a half so not too much time is wasted on the movie.

Nevertheless, “Johnny English Strikes Again” is still an hour and a half that moviegoers will never get back.

In “Johnny English Strikes Again,” Great Britain has suffered a major cyber-attack just ahead of the country hosting other nations at the G12 summit.

The cyber-attack has exposed all of the MI7 intelligence officers, and now everyone charged with protecting the country from attack and exposing spies have had their identities compromised.

The Prime Minister (Emma Thompson) finds herself in a fix.

Great Britain has no more undercover agents and the Prime Minister has the most powerful leaders in the world coming to her country for a summit.

She has to protect those leaders at all costs.

She has to protect government secrets and intelligence from those countries as well.

But all of her undercover agents are out of commission because of the cyber-attack.

The Prime Minister has no choice but to bring some former undercover agents like Johnny English (Rowan Atkinson) out of retirement to find out who or what is behind the cyber-attack and to protect the powerful leaders of the free world while they are in Great Britain for the G12 Summit.

The only problem with bringing old heads like Johnny English out of retirement is that the old school way of doing things has given way to new school technology and advancements.

Gone are the days when undercover agents packed guns.

And gone are the days when agents tried to entirely stay off the grid.

New MI7 agents use technology like phones to capture evidence on suspected spies and terrorists.

However, Johnny English is not a new school agent.

He is strictly old school and refuses the technology of the 21st century, instead relying on a pistol and old school Aston Martin car to track down the enemies of Great Britain.

Johnny avoids using even the most basic technological advancement like a smartphone because he believes that a cell phone will allow spies to know his whereabouts at all time.

After years of teaching at a boarding school, where instead of teaching his students the three R’s like reading, writing and arithmetic, he teaches the students the art of camouflage and how to use explosive devices, he is excited about re-entering the world of undercover work and serving his country, which is under constant threat from unknown assailants.

Unfortunately, it is not just Johnny’s old school way of doing things that makes him the least likely of the unretired agents to capture the cyber-terrorist or cyber-terrorists.

It is his ignorant and imbecilic way of doing things that makes him not only unlikely to catch the attackers, but most likely to place Great Britain in more danger than it already is in.

Fortunately for “Johnny English Strikes Again” its imbecile of a protagonist provides the movie with its only positive traits.

While the jokes are lame, Johnny might give some moviegoers a few silly laughs.

He sets an exclusive restaurant in the south of France on fire.

Johnny gives a suspected spy an alias, but then he cannot even remember his own alias.

And when the Prime Minister finally has some good words for Johnny, he exposes himself to the press in a way that would make Forrest Gump proud.

The jokes are slapstick and do not require moviegoers to think like some intelligent comedic films such as satire.

Right from the start, moviegoers will know who the culprit is because there are not many suspects to begin with.

Nevertheless, moviegoers of a certain age group might find “Johnny English Strikes Again” appealing because of its lowbrow humor.

But for others from a different age group, the hour and a half sitting in the theater cannot end quickly enough.

So while this review of “Johnny English Strikes Again” might make journalism professors chafe, telling the truth, whether it is good, bad or ugly, is also a tenet of journalism.

While the movie might not satisfy many movie buffs, this review should satisfy journalism purists.

This review contains a creative lead.

This review contains a description of the movie without giving away too many of the details.

This review tells what is good about the movie.

This review tells what is bad about the movie.

And this review concludes with this sentence.