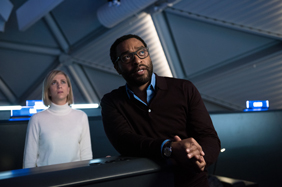 Sometimes things happen beyond our control and have a bigger impact than they would have at any other time or place.

Likewise, on Monday NASA discovered water on Mars, which means life could exist on the red planet.

And on Friday, “The Martian” was released, which is the harrowing tale of survival of a NASA astronaut left for dead on Mars with very little chance of survival.

Coincidence?  I think not.

Mark Watney (Matt Damon) leads a team of astronauts on a mission to Mars in an attempt to learn more about the most intriguing planet to human beings.

The mission is stocked with survival tools for the crew but when a fierce storm grips the red planet, Mark is struck by debris and left for dead by his NASA colleagues.

However, Mark has enough oxygen to survive his injuries and when he realizes that he is alone on Mars with no means of communicating with his colleagues at the Johnson Space Center in Houston, he has to get creative if he is going to survive after his rations run out.

Despite the recent discovery of water on Mars, Mark knows it will be impossible to survive without growing food, which is also impossible without water.

Nevertheless, he uses his talents as a botanist to create water and grow his own garden of potatoes inside his headquarters on Mars.

Although food is the first step to survival for Mark in “The Martian,” communication with NASA is his only hope of returning home alive.

For much of the film, Mark is alone on the screen like Tom Hardy in “Locke” and is able to carry the scenes with ingenuity and humor by his lonesome.

The other half is “Apollo 13” as Mark and co-workers like Vincent Kapoor (Chiwetel Ejiofor) share in the pain of desperation as they struggle to bring him home alive.

“The Martian” is the equivalent of an extremely entertaining science class, and I do not even like science.

However, it is just that entertaining.

“The Martian” is science fiction without the fiction as it accurately combines the reality of traveling and surviving in space for years, with the courage that one would have to have to survive such a horrific tragedy so many million miles away from friends and family.

The film also has some surprises as Michael Pena successfully sheds his sophomoric comedic image for a dramatic blockbuster in “The Martian.”

Unfortunately, “The Martian” ends predictably, but it will be the ending that moviegoers want.

However, a more dramatic conclusion would have been more desirable than the anticlimactic ending given.

Likewise, while the whole world is rooting for Mark, it would not be a movie without a nemesis that cares more about the bottom line than saving someone’s life.

The ultimate bottom line is that Mars still intrigues us on Earth, and this film and recent scientific findings will add to that lore.

And fortunately, the timing for the film is absolutely right on time!