Movie Review: ‘Interstellar’ Could Have Been Otherworldly 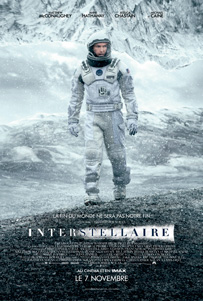 Mankind Was Born on Earth, It Wasn’t Meant to Die Here

A price comes with the technological advancement that we seem to take for granted.

We live in an environment in which tech companies come up with new innovations seemingly every day and just when one thinks they have the latest and the greatest something bigger and better comes along.

After all, companies like Apple are in the news almost every day with the latest “iWhatever” gadget.

With so much emphasis on technology and very little interest on sustaining life and the world’s resources, the world depicted in “Interstellar” is at a crossroads in its existence.

The Earth will be totally uninhabitable in a generation and those who live on the greatest planet are sickened with the very dust that gave life to previous generations.

Coop (Matthew McConaughey) is an explorer and adventurer at heart, but because of the current economic climate he is forced to be a corn farmer, and if the government gets its wish his children will follow in his footsteps and run the farm.

There are a limited amount of slots available at the university and even though he wants his children to become engineers, school officials make it known that the country has enough engineers and what it needs is people to feed those engineers.

When he and his young daughter Murph (Mackenzie Foy) stumble upon a secret facility, Coop’s former professor encourages him to pilot a space mission to research whether a new galaxy would be hospitable to human life.

Earth will no longer be habitable in the coming generations and their last chance at saving family, friends and their fellow man is to relocate the entire Earth’s population to a new world unknown even to scientists.

As is said, maybe mankind was born on Earth but not meant to die on Earth.

“Interstellar” is an absolute spectacle to see on an IMAX screen.

The space shuttle scenes makes one think he/she is actually on the shuttle because it seems as if the theater rocks as the vessel rocks on the gigantic screen.

Also, the visuals of space and orbit are simply breathtaking.

Nevertheless, the plot of “Interstellar” is nothing unique or special and that takes away from the talent in front and behind the camera.

Other than the beyond outstanding visuals of “Interstellar,” the film is probably something that people have seen countless times in the past.

Unfortunately, there is a price that comes with the technological advancement of film also.

Despite the beauty that one can create with cameras and computer graphics, old school storytelling should not die by the wayside.

We live in a world where bigger appears to be better whether that is true in actuality or not.

Just like in many ways the simple way of life had its benefits, the simple way to tell a story on film should not be ignored by Hollywood’s new technology and big budgets.

If “Interstellar” could have combined those two elements, filmmakers would have had a movie that would have been otherworldly.