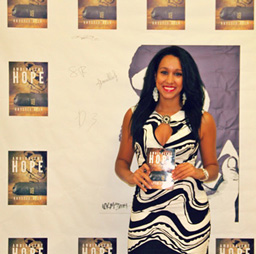 Author Krystle Rich poses with a copy of “Ambivalent Hope: A Gun and a Prayer” at the book release party in Los Angeles (Photo courtesy of Krystle Rich).

Rich in Spirit and Passion for Christ

It seems that the natural career path for a journalist is to make a name for himself or herself by informing the public as a reporter, then to entertain or educate the public as an author.

However, for Krystle Rich entertaining her audience is not enough.  The award-winning producer and editor from NFL.com and Time Warner Sports wants to enlighten the public with her passion for Jesus Christ.

Her first novel “Ambivalent Hope: A Gun and a Prayer” hits stores in April, but the multimedia journalist has created the first short film to promote a novel in literary history.

Her story of a young man struggling to avoid the streets and stay true to God hits close to home for her, and she is hoping that the book and short film/trailer hits the heart of anyone struggling with faith, poverty and a violent environment.

RM: How important was it that you show a young person struggling with the idea of faith and God when many believers seem to ignore the fact that that struggle is real for many people?

KR: For me it is very important to tell these stories because, as you stated, people may become so preoccupied with their personal situations to realize that others are struggling with trials far worse. For those who are not impoverished, mentally or financially, reading this book will bring a sense of compassion for those who are. If a person is struggling in any facet of their life, the goal is to bring them hope. As a young mind matures, it goes from believing what someone of authority has told them, whether a parent or a priest, to one day making their own conclusions. “Ambivalent Hope: A Gun and a Prayer” shows you that process firsthand. The interesting thing is that the main character, Tumaini Battle, was raised in church but happens to be poor with a heavy “street-influence” on his life. What he was taught about God is tested to the limit due to his life circumstances and lack of guidance. The book tracks his thought-process from his innocent age of 9 to 32 years old. Within that time period, you see all the thoughts of victory and triumph but you also see many thoughts of downfall, failure, fatigue and defeat. Those are thoughts and feelings that one would never usually verbalize. Since the reader will get a firsthand glimpse of those thoughts, he or she will find themselves growing with the main character.

RM: What does it say about the state of Black fatherhood that the two boys met their dad for the first time in jail?

KR: The book cannot speak for all Black fathers. However, it does speak to an issue plaguing not only the Black community but other ethnic backgrounds as well. When fathers are not present in their children’s lives, that child will struggle with their identity and will most likely have a lack of guidance. It is hard for one parent to play two roles, but unfortunately it happens quiet often. I want to reach people at a young age, warning them that decisions you make in life today, as cliché as it sounds, will affect you forever and possibly others.

RM: What would you say to people who ask where God is when they go through trials and tribulations and He seems distant?

KR: That is a huge issue that “Ambivalent Hope” deals with. The main character struggles with God because once he accepted Him into his life he expected instant change. One of the keys that the book speaks to is how to identify God’s voice in your life and apply it to your situation. On top of seeking Him, learning His voice and gaining a trust is a crucial part in making that seemingly huge distance disappear.

RM: What would you say to young Black men who have the excuse that they cannot turn their lives around because of their upbringing and/or their environment?

KR: I would say to them that I totally understand their reasoning. With most of my family from the streets of Philadelphia I can empathize with someone who feels like there is no getting out. However, I would also challenge that person, of faith or no faith, and ask them what is holding them back? If they can identify what is holding them back, whether it is finances, education or gang-affiliation, then they can identify what needs to be done to get out of that situation. It then becomes a test of one’s willingness to want better and be prepared to step out of their comfort-zone and maybe even struggle more to walk into their purpose and new level of glory.

RM: The mother hums “Amazing Grace” while pouring a glass of Crown Royal. Do Christians who still struggle with drinking or smoking make Christianity more relatable to non-believers or do they turn off non-believers because it looks like hypocrisy?

KR: I am so glad that you caught that! There will be both cases where Christians with their own personal struggles will attract and dispel non-believers. In neither case does it take away from the fact that all people struggle with things, including Christians. Christianity is a journey. Most people do not want to come to God because they know they aren’t perfect and they think other “Christians” will judge them. The truth is you don’t have to be perfect to come to God, only willing to get there. Alcoholism is used as one of those problems in the book. It is also used to spread awareness [that] your decisions in life will not only affect you but others.

RM: What is your ultimate goal with the short film?

KR: My short/trailer is the first-ever short film to promote a book. If a book trailer is made they are usually 30 seconds to two minutes long, not an entire short film. The goal is to give the more visual generation an in-depth look at what they can expect from the book without giving everything away.  I would love for the interest from the trailer to be so intense that people transfer that passion into reading.