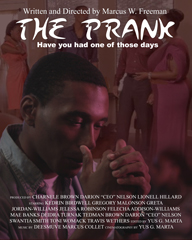 Short films are supposed to wet the appetite of moviegoers.

In a very short window, the filmmaker has to tell virtually a complete story and leave the audience wanting a full-length feature film.

New filmmaker Marcus Freeman does that and more in “The Prank,” a short film about a practical joke played on a classmate at the 15–year reunion of Joseph McBride High School.

Doug (Gregory Malonson) is that cat from high school that has not gotten over the wrongs done to him in the past.

He still has feelings for his high school sweetheart even though almost two decades have passed.

While the rest of the class of McBride is eager to catch up and reminiscence on old times, Doug is out for revenge on Kevin.

He sets Kevin up with Francesca, a young “lady” with a controversial past.

Her metamorphosis makes her almost unrecognizable at the reunion.

However, before Kevin realizes the prank that has been played on him, a catastrophe erupts at the reunion that will make it impossible to correct an innocent joke.

“The Prank” is brilliant in its writing and its suspense.

Some filmmakers cannot set up a story and leave audiences on the edge of their seat after 120 minutes, and Freeman has managed to accomplish that feat in a mere 17 minutes.

The actors did a superb job with their performances, producing the type of emotion from audiences that veteran actors get paid the big bucks for.

Doug will be hated because of his childishness and pettiness, and people will have sympathy for Kevin and his predicament.

Unfortunately, some of the actors look a lot older than they would if they were only 15 years removed from high school.

Likewise, the reunion is held at a private home instead of a hotel or resort like many class reunions.

However, those minor details are due to circumstances not the brilliant talent of Freeman and his cast.

What Freeman is able to do with just 17 minutes and a small budget, makes one wonder what he could accomplish with a full-length feature and a big budget at his disposal.

The possibilities and promise of this new filmmaker has definitely wet the appetite of those who know his potential.