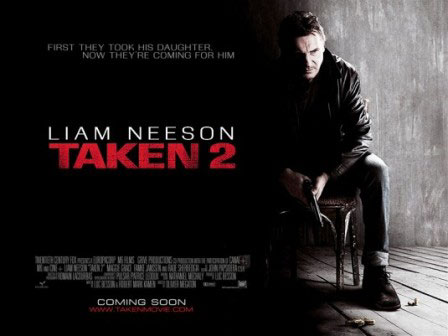 Taken For a Decent Ride

Every man dreads having the women in his life taken away from him by another man.  Whether it is a man’s wife leaving him for another lover or his daughter distancing herself from him after finding love for the first time, having a lady taken away from you challenges one’s manhood.

However, what if the men trying to take your loved ones away from you were actually assassins, hell-bent on a murderous retribution for taking the life of one of their loved-ones?  How would a real man respond if he knew a man was trying to take his daughter and ex-wife out literally, not in the romantic sense?

In the Taken 2 movie, Bryan Mills (Liam Neeson) has to decide how to save the lives of his ex-wife and daughter, while also saving his own life.

Unfortunately, the life of a CIA operative can lead one down the road towards obsessive-compulsive disorder, especially if that person is also a father.  When Bryan’s daughter Kim (Maggie Grace) is kidnapped in Albanian, the retired CIA operative kills those responsible for the kidnapping.

One can understand a father resorting to violence against those who violated his daughter.  One can also understand the father of the murdered kidnapper seeking revenge for ending the life of their offspring.

When a planned trip between Kim, her mother Lenore (Famke Janssen) and her new beau is canceled, Bryan invites the two ladies to Istanbul to spend some quality family time together.

Despite the ambiance of such an exotic trip, the family time quickly turns into survival time, when assassins arrive at the hotel and begin violently following the family around the city.

Life and death predicaments bring out the best in almost everyone, but for someone that is probably borderline genius, any predicament is conquerable.

The Taken 2 movie is a pretty good effort because one does not have to see the original Taken to follow the storyline.

Furthermore, one can immediately empathize with a family that finds themselves in such a catch 22; rescue one’s daughter by any means, only to then find yourself ducking assassins, who seek retribution, for the rest of one’s life.

Those who see the Taken 2 movie will marvel at the exploits of the retired CIA operative and how his genius is put on display when he attempts to rescue his family members from the violent kidnappers.

Nevertheless, what is unrealistic about the Taken 2 movie is why the assassins, who want revenge for a previous death, do not get the results they desire quicker and end the situation much sooner.

Despite the obvious unrealistic nature of that situation, the Taken 2 movie is still an enjoyable ride with action, at least, that is realistic.

For an action film, the acting in the Taken 2 movie was acceptable, with the scenes involving Bryan and Kim’s new boyfriend Jamie (Luke Grimes) taking the cake.  The concerned father even goes so far as to put a GPS in his daughter’s cell phone and is able to track her down at Jamie’s house, finding her in a very compromising position.

Nevertheless, one can expect such actions from a father concerned about the well-being of his daughter and one can expect that a real man would have his own life taken, before anyone takes away the ladies of his life.