Movie Review: Third Time’s Charm for ‘Barbershop: The Next Cut’ 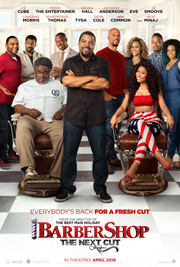 “Barbershop” never seemed like the film franchise that would reach trilogy status.

The films had tackled such important topics as gentrification in the past, but franchises like “The Hangover” and “American Pie” proved how hard it was to keep the momentum going with more than two films.

However, the violence that has made Chicago a virtual war zone, has made “Barbershop: The Next Cut” one of the most important and timely movies in a long time.

And thanks to heart and humor, “Barbershop: The Next Cut” is by far the best installment in the series, which includes its spinoff “Beauty Shop.”

Like at any shop, Calvin’s Barbershop on the South Side of Chicago has experienced much turnover as it pertains to employees.

Many newcomers have picked up their clippers like Rashad (Common), who is married to Terri (Eve) and Jerrod (Lamorne Morris), but regulars like Eddie (Cedric the Entertainer) and Calvin (Ice Cube) remain the heart of the neighborhood institution.

And because of hard economic times, the barbershop has merged with the beauty shop.

The addition of stylists like Angie (Regina Hall) and Draya (Nicki Minaj) transforms the all male sanctuary (the original man cave) into a testosterone versus estrogen battlefield, which makes the usual barbershop conversation more profound and balanced.

However, nothing is more profound in Chicago than stopping gang violence.

When Vice Lords and Gangster Disciples battle over turf, new recruits and even the barbershop, Calvin and Rashad organize a weekend cease-fire throughout the entire South Side.

Their efforts may save the neighborhood or lead to their exit from their familiar location, which has been a neighborhood staple since Calvin’s father operated the shop.

Although many movie critics do not like comedies or understand Black comedies, director Malcolm Lee (“The Best Man”) takes Black comedy or dramedy to a new level with compassion, composure and intelligence in “Barbershop: The Next Cut.”

But it is a must-see even for those who may not know what goes on in many inner-city communities, especially Chicago.

“Barbershop: The Next Cut” will bring awareness and hopefully solutions to the plight of many Black neighborhoods.

In a week in which former New Orleans Saints defensive end Will Smith was gunned down in the streets of New Orleans, “Barbershop: The Next Cut” shows the positive difference Black men can make if they use their brain and not their brawn or braggadocio.

Conflict resolution is just not a figurative theme in the film, but a literal one for two of the film’s stars.

In the 1990s, Common and Ice Cube had a bitter rivalry on wax.

Their collaboration shows how two grown men can set differences aside to make a difference and a dollar.

The performances by the duo are noteworthy and dramatic.

In addition, Cedric the Entertainer and Morris are absolutely hilarious.

But the seriousness of “Barbershop: The Next Cut” is what makes it succeed.

And the serious times in Chicago makes it the most important and timely film in the “Barbershop” franchise history.