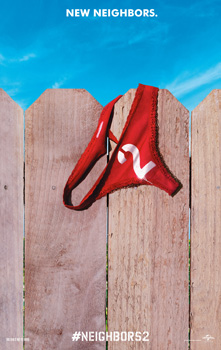 Whoever knew that fraternities could be sexist? Just kidding!

The chants that many of them say often call women out of their names, but few probably thought about the sexism when chanting them.

But what if sororities were allowed the same freedom as fraternities?

Unfortunately, for Mac Radnor (Seth Rogen) and Kelly Radnor (Rose Byrne), they will become experts in that comparison in “Neighbors 2: Sorority Rising.”

In the original “Neighbors,” the Radnor family hopes to begin their young family life in peace and tranquility.

Unfortunately, their next-door neighbors are from a place far worse than Hell.

They are from a fraternity, and members like Terry (Zac Efron) and Pete (Dave Franco) basically live by the motto, “no partying, no peace.”

The Radnors somehow survive their war with the frat after the rowdy guys move out of their rental home.

But when it is time to sell their starter home and move into their dream home, they have to relive the same nightmare.

This time their nightmare includes bloody tampons and twerking videos thanks to Shelby (Chloe Grace Moretz) and her new sorority sisters of Kappa Nu.

The university does not allow equal partying when it comes to sororities.

In “Neighbors 2: Sorority Rising,” fraternities are allowed to party, but sororities are forbidden to party per school rules.

For the girls, this asinine rule sucks on a couple of levels.

First, girls just wanna have fun too in college to quote someone college kids have no clue ever existed, pop star Cyndi Lauper.

But also, because the frat parties are wack and they are extremely sexist.

Furthermore, when Shelby tries to rush a sorority, her potential sisters make her get rid of her weed, despite the fact that she paid $14 for it.

Looking for a group of sisters that she can party and blaze that “ish” up with, she and her friends Beth (Kiersey Clemons) and Nora (Beanie Fieldstein) rent a “dilapidated mansion” for $5,000 a month.

The only thing in Kappa Nu’s way is a family of “old people” whose house is in escrow for a month.

The old people, aka the Radnors, want Kappa Nu to abstain from partying for a month until the house sales.

However, the girls in “Neighbors 2: Sorority Rising” have different plans, and the war is on like Donkey Kong (old person cliché that the youngsters won’t understand, unfortunately).

“Neighbors 2: Sorority Rising” might be equally as good as the first “Neighbors.”

“Neighbors 2: Sorority Rising” shows fraternities and sororities can be equal in their sexism and debauchery even though fraternities usually get most of the blame.

However, he does not understand why as a Black cop he has to wear a body camera.  Like he says, it is not like he’s going to shoot himself.

His scenes with Hannibal Burress, where they arrest drug dealers, are classic.

The duo Taser White suspects, but are nice, polite and professional with the Black suspects.

If only life could imitate art sometimes when it comes to the treatment of Black suspects.

Unfortunately, “Neighbors 2: Sorority Rising” is what one comes to expect from a Rogen film.

They are hilarious but one knows what to expect like a quota on Jewish jokes.

But “Neighbors 2: Sorority Rising” is still laugh out loud funny.

And it shows how comical and enlightening a serious topic like gender equality can be.