Movie Review: ‘Ready Player One’ Gets It Right 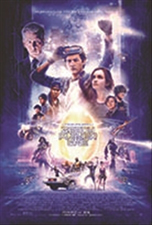 Finally Got it Right

The song talked about all of the failed relationships that people go through before they finally get it right romantically.

In recent years, Hollywood often is like that person desperate to find that magic but failing time and time again.

However, in the Steven Spielberg directed film, “Ready Player One,” Hollywood finally gets an action film right.

Although the formula of good versus evil is still present as in many action films, “Ready Player One” is fun and unique enough to create its own lane, and the lane is big enough even for non-action fans to really enjoy.

In “Ready Player One,” the old school is the new school.

Columbus, Ohio has replaced New York as the most populous city.

And while New York has made stacking people on top of people look chic with modern-looking walk-ups and penthouses, in Columbus the residents just stack trailers on top of trailers to deal with the overcrowding and overpopulation.

Money is scarce for most people in 2045, but thanks to the innovative mind of James Halliday (Mark Rylance, “Bridge of Spies”), anything in the world can belong to anyone at anytime thanks to the Oasis.

Halliday’s Oasis is a virtual reality world that allows anyone to be anywhere in the world, be anybody they want and enjoy everything in the world without leaving the comfort of their trailer.

The Oasis consists of games, which allow players to earn coin (money), but the ultimate prize in the games is the hidden Easter egg.

Halliday has constructed a game that forces players to find three hidden keys, which will give them clues that will lead to the Easter egg.

Whoever finds the egg, inherits the fortune from Halliday’s virtual reality/technology company, worth half a trillion dollars.

While many of the poor residents of the real world like Parzival (Tye Sheridan), Art3mis (Olivia Cooke) and Aech (Lena Waithe) want to inherit the money for noble reasons, Sorrento (Ben Mendelsohn, “Bloodline”) wants it to continue his domination over the poor people of the country.

The future of the country depends on who ever possesses the egg in the future.

First and foremost, “Ready Player One” is special because of its appreciation for 1980s pop culture.

The film consists of music from my sister’s favorite decade like “Jump” by Van Halen, “We’re Not Gonna Take It” by Twisted Sister as well as “Faith” by George Michael.

Furthermore, “Ready Player One” would not be a true 1980s-loving film without references to Michael Jackson’s “Thriller” and Prince’s “Purple Rain.”

“Ready Player One” even shows love for many people’s first gaming console, the Atari.

The visuals in the film are dynamic, combining the best special effects of past action films into one movie.

Unfortunately, the film might include some 1980s references that not everyone will be familiar with.

Nevertheless, there is enough for all ages and genre fans to enjoy this film.

Like R. Kelly and Jay-Z tried to do 16 years ago, Spielberg combined the best of both worlds and finally got it right.