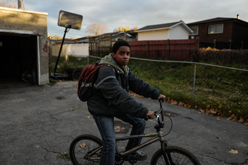 A Star is Born

BET’s miniseries “The New Edition Story” became the talk of the town in 2017.

But for some reason, Myles Truitt’s performance as a young Ronnie DeVoe got overlooked, much like DeVoe’s contributions to New Edition.

However, just like the New Edition offshoot Bell Biv DeVoe made DeVoe a lifelong star, Truitt’s lead role in “Kin” might make him a teenage sensation in Hollywood and a bona fide young movie star.

And in “Kin,” Truitt intelligently picked a role totally different than his role in the music biopic, which is a unique hybrid mash-up of movie genres that definitely brings the heat.

Eli’s beloved mother has died and he has to face the taunts of his bullying classmates who make fun of his deceased mother.

He is a good kid, but he does not fit in with the other kids in his school.

Eli constantly finds himself in fights, which ultimately leads to his suspension from school for a few days.

He has an older brother named Jimmy (Jack Reynor), but he might be the worst role model in and out of Eli’s life, considering that he has spent most of Eli’s childhood behind bars.

Furthermore, Eli does not fit in with his family despite the love that he has for them.

He is an adopted African-American child raised by adopted White parents, solidifying his feeling as an outsider.

Worst of all to a child, Eli and Hal are dirt poor as Eli’s dirty sneakers prove.

To help make ends meet, Eli has to resort to stealing copper, aluminum and other scraps to bring in extra money.

However, when he breaks into an abandoned warehouse, he finds something more valuable and potentially dangerous than any other thing that he has stolen in the past.

Unfortunately, his older brother Jimmy has probably stumbled on something even more dangerous than what his baby brother has encountered.

Jimmy has earned the ire of the Balik brothers, Dutch (Gavin Fox) and Taylor (James Franco).

While Jimmy was locked up, the Balik brothers made sure that he was protected from the gang violence that runs rampant in American prisons.

However, the protection did not come out of the goodness of the Balik boys’ heart.

That protection came with a price.

Although Jimmy has yet to find a job since his release from prison, he still owes the Balik boys $60,000 for their “security” services.

While debt is a normal reality, owing a loan shark and a gangster is a bit more vexing than owing a bank or a credit union.

Banks will take your property away from you if you do not pay up.

Gangsters and loan sharks will take your life and the lives of those closest to you if you do not pay up immediately.

And if Jimmy does not pay the Balik brothers, the lives of Hal and Eli might be taken as collateral.

In “Kin,” Jimmy’s solution to his predicament might put his kinfolk in danger that they can never escape from, unfortunately.

The movie “Kin” will remind some of the phenomenon in music known as the mash-up.

In music, producers and deejays will remix different songs to make a unique mix of a record.

In “Kin,” that is exactly what filmmakers Jonathan Baker and Josh Baker do by mixing several genres into one cohesive group or family.

“Kin” has its elements of the action genre.

“Kin” has its elements of the gangster genre.

“Kin” has its elements of the superhero genre.

And “Kin” has its elements of the drama genre, and boy does it have its share of family drama.

But all of those moving parts work brilliantly.

Hollywood often receives criticism, especially from this publication, for not thinking outside the box enough.

Movies often seem to follow the same criteria with no room for real creativity.

Some musicians have the same criticism of the recording industry.

Instead of having creative minds running many of these entertainment companies, they often employ those who only have an eye for dollars and cents, and that makes sense.

But the problem with that mentality is that business minds only want to do what is proven to be successful and that often leads to music that all sounds the same or movies that fall into the formulaic and predictable categories.

The other problem is that when filmmakers are finally allowed to think outside of the box, they sometimes prove that the old box was not as bad as previously thought, just look at the film, “mother!”

But like films before like “Ex Machina,” which was a successfully weird and different science fiction flick, “Kin” is just as successful in the newly christened (by RegalMag.com) hybrid film genre.

And although “Kin” has its corny and cheesy moments, not to mention the fact that it is difficult to see Franco as a ruthless gangster despite being a good actor, the film still is very, very good.

But “Kin” is great because it represents new beginnings.

The film is totally unique to many of the films currently in the theaters and streaming on various platforms because of its hybrid nature.

And “Kin” represents the blossoming of a new teenage acting star, which happens to be African-American, which is great.

Hollywood has always had its share of young superstars with actors like Daniel Radcliffe (“Harry Potter” franchise), Haley Joel Osment (“The Sixth Sense”) and others.

Film gives actors the opportunity not to be typecast as a particular character unlike television.

It is still difficult to imagine Keisha Knight-Pulliam as anyone except Rudy Huxtable from “The Cosby Show.”

But thanks to his agents, parents or his own foresight, Truitt has made sure he will not be typecast as the little boy who played a teenage music star in “The New Edition Story.”

By choosing or being chosen to play Eli in “Kin,” Truitt has made sure that Hollywood knows that he can play different characters and shine in a new kind of film.