Movie Review: ‘Alien: Covenant’ Has All Elements to Be Smash 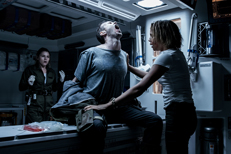 Hard to Mess This Up

With all of the aforementioned qualities to boast about, it would have been utterly impossible for “Alien: Covenant” not to be a critically acclaimed movie and a box office smash.

The film “Alien: Covenant” begins in the 22nd century aboard a space vessel called The Covenant, which is traveling for years in outer space to reach an uninhabited planet.

The 15-crew members of The Covenant want to create a utopian paradise on the beautiful new planet but unavoidable problems in the galaxy throw their plans off course drastically.

Members of the vessel are asleep in pods for the years that it takes to get to the new planet but are awaken violently by natural forces in outer space that were unpredictable.

Unfortunately, some members of the vessel do not survive the tragic incident.


Therefore, many members like the new captain want to settle on a closer planet that is habitable for human beings, which they find accidentally.

On the new planet they find a beautiful place with mountains, waterfalls and lakes.

The crew members in “Alien: Covenant” have to find a way to get off of the planet without allowing the aliens to wreak any more havoc than they already have wreaked on the innocent human occupants of this planet.

“Alien: Covenant” is an outstanding but sometimes derivative space film.

The storyline is great.

The directing is great to be expected.

And the acting is superb from top to bottom.

Fassbender is one of the best actors in the game in 2017 and he holds down two similar, but conflicting roles.

The “Steve Jobs” actor plays two robotic-type roles, one with benevolent plans and the other with malevolent intentions.

While Fassbender is fantastic in his dual roles, the British born actor is not as good as Armie Hammer (“The Social Network”) or Tom Hardy (“Legend”) in their past dual film roles.

Smollett’s role as Ricks operating a spaceship is as far as possible from the hip-hop soap opera role he has as Jamal Lyon.

Nevertheless, it would have been great if Smollett had chosen a role that allowed him more opportunity to show off his acting chops.

Ejogo also does well in “Alien: Covenant” but does not get a chance to show the style and range she has become known for in roles in films like “Sparkle” or as Coretta Scott King in “Selma” and “Boycott.”

Despite its greatness, “Alien: Covenant” does steal a little flavor from the space film “Passengers” starring Jennifer Lawrence and Chris Pratt.

But while “Passengers” was a lightweight space movie, “Alien: Covenant” is a heavyweight flick about the dangers of outer space and it has all of the industry heavyweights in its corner.