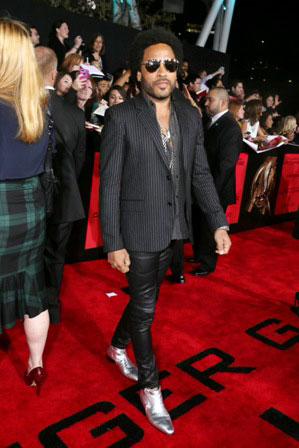 Extremely High Bar Out of Reach

The 74th Hunger Games made for a dramatic and romantic tale.  Star-crossed lovers Katniss Everdeen (Jennifer Lawrence) and Peeta Mellark (Josh Hutcherson) survived a fight to the death, while their romance played out in front of the entire country of Panem.

Annually, the games are played as a punishment for a previous rebellion against the Capitol by forcing parents to offer up their children to fight in the competition.

The story of young Katniss and Peeta made for wonderful theater, but in the districts of Panem, very few are buying the authenticity of their love.

As Katniss and Peeta embark on their Victory Tour throughout the districts, another rebellion is simmering.

Residents are killed during their victory speeches and eventually entire districts are wiped out.

Unwillingly, Katniss has become a source of hope for the entire country.  Volunteering to fight in the games in place of her sister Primrose (Willow Shields) inspired those around the country to realize that they were strong enough to stand up to the powers that be and live to tell about it.

In “The Hunger Games: Catching Fire,” President Snow (Donald Southerland) senses the threat that Katniss poses to his regime, and throws a monkey wrench in the Hunger Games, forcing past winners to compete in the third ever Quarter Quell.  Previous winners of the Hunger Games were supposed to be exempt from further competition, but an exception is made for the 75th anniversary.

President Snow brags that not even the strongest can overcome the power of the Capitol.

Katniss and Peeta are snatched away from their district without a chance to say goodbye to their loved-ones and taken away to a new arena, where they hope that the odds are forever in their favor.

Although President Snow is determined to quiet the rebellion once and for all, the Quarter Quell becomes a cover for another rebellion thanks to Plutarch Heavensbee, played brilliantly as expected by Phillip Seymour Hoffman.

There is nothing wrong with “The Hunger Games: Catching Fire” per se, but it just does not live up to the expectations one would have after watching the first installment and its brilliance.

Once again the cinematography is brilliant, the special effects are masterful, and the wardrobe is over the top, in a good way.

Nevertheless, “The Hunger Games: Catching Fire” proves why many sequels never satisfy the diehard fans of a franchise.

“The Hunger Games: Catching Fire” never quite lives up to the dramatic realism of the first film.  Panem is a microcosm of current society and many foreign countries in that when society speaks out against the oppression of its government, those citizens are usually silenced by any means necessary.  The sequel does show that the struggle in Panem is still ongoing, but its delivery is not as dramatic.

However, “The Hunger Games: Catching Fire” benefits from the superb acting of Hoffman and Jena Malone, who plays tribute Johanna Mason with an in your face attitude reminiscent of Jennifer Hudson in “Dreamgirls.”

Furthermore, Jeffrey Wright portrays a character (Beetee) with such quirkiness that will definitely expose him to a new demographic of fans.

In addition, Lenny Kravitz continues to develop as an actor, showing depth and emotion, which proves he might have a Plan B if that music thing does not work out.

The sequel, however, does give one hope that “The Hunger Games: Mocking Jay Part 1 and Part 2,” can live up to the extremely high expectations set in the first film.