Movie Review: ‘Underwater’ Does Not Keep Head Above Water 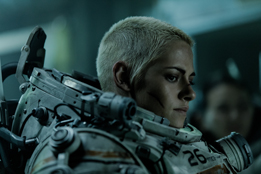 The legendary funk band The Time had a song in 1982 called “Wild and Loose.”

But loose, not so much.

The better adjectives for “Underwater” are wild and crazy.

Or better yet, words like demented, deranged, outrageous and touched can describe “Underwater” as well.

Greed can describe why the crew in “Underwater” find themselves underwater in the first place in more ways than one.

The need for more profits, more exploration and more discovery leads to the treacherous ordeal that many scientists and engineers find themselves in.

Trying to discover more energy sources, a company has drilled deeper into the ocean than any offshore company in the history of the world.

The company has drilled 36,000 feet below the ocean to conduct scientific experiments.

However, instead of just finding new sources of energy like more barrels of oil, the crew begins witnessing strange sightings of species that they have never seen before.

Strange sightings are one thing.

Strange sounds are another thing.

But strange explosions are on an entirely different level and raises alarm bells, as it should in “Underwater.”

The thing about drilling or fracking is that it can cause earthquakes.

Earthquakes caused by oil drillings have become commonplace on the news as of late.

But how many earthquakes and aftershocks can one reasonably expect?

Furthermore, what is the animal like sound coming from outside of the ship?

After the initial earthquake, very few survivors remain on the fleet.

Furthermore, some of the survivors do not have adequate knowledge of the vessel to get the other survivors off and to safety while they still have oxygen and other essentials necessary to sustain life.

Luckily, Norah (Kristen Stewart, “Charlie’s Angels”), a mechanical engineer, survives the jolt and has the skills necessary to get the vessel somewhat in working condition.

After finding more survivors as she surveys the damaged vessel, Norah and company luckily find the Captain (Vincent Cassel) who has badly injured his arm during the explosion.

Captain knows even more, obviously, than Norah and devises a plan for the survivors to get to another part of the vessel and use escape pods to propel them to the surface of the water and hopefully survival.

They have a predicament to overcome though.

They have enough suits with oxygen to walk underwater along the ocean floor.

But do they have enough oxygen for the treacherous walk, which is around a half mile?

There is a chance that the survivors might die on their journey to the escape pods.

But as Captain explains, there is a chance that they might live too.

When the survivors reach the first step in their escape plan, they realize that the earthquakes, aftershocks or explosions are something a little scarier.

Paul and Smith discover a new species that attempts to attack the two men.

While scared, the new species is rather small and not harmful enough to destroy a vessel that weighs tons, literally.

But when the survivors in “Underwater” find a species bigger and more menacing than anything their eyes have witnessed, their final resting place might be underwater.

First of all, Stewart does her thing in “Underwater.”

The will to survive and thrive is inspiring no matter what the movie is.

The human spirit is simply amazing and resilient.

But the star of the movie “Underwater” is Miller, by far.

Although he knows death could become imminent, he still finds a way to lighten the mood.

But the question that needs to be asked of Miller’s character Paul is why is a full-grown man carrying around a stuffed animal?

Paul must carry the stuffed animal for good luck.

Nevertheless, it looks very strange to quote Cicely Tyson in “Diary of a Mad Black Woman.”

R&B fans of a certain age will compare Paul’s affinity for stuffed animals to Baby Gerry of the 1980s R&B group Full Force’s love for carrying a teddy bear on album covers.

But despite good performances by Miller and Stewart, “Underwater” drowns in some Hollywood stereotypes.

Rodrigo is the only Black character.

The film “Underwater” suffers from some absurdity.

But despite the absurdity of some scenes, the film still looks realistic, visually.

Unfortunately, “Underwater” suffers from some bad lighting throughout the film.

Furthermore, some moviegoers will struggle understanding the survival mission in “Underwater.”

Nevertheless, even those who do not enjoy “Underwater” will understand the pressure that survivors find themselves under when faced with a precarious situation.

But the film never makes it quite to the surface.

And the fact that “Underwater” had an $80 million budget might leave the studio underwater, under debt and overestimated.

That reality exposes a bigger problem that persists in Hollywood.

Movie and television executives seem to suffer from disconnect with the consumer base that watches their films and shows.

Often, tens of millions of dollars get spent on movies people are not eager to see.

Instead of earning money, millions are lost.

“The Best Man Holiday” suffered the same struggle as “Last Friday” because out of touch movie studio executives did not know what their consumers wanted.

Obviously, Hollywood executives must be wild too and a little bit loose, as in inexact in their decision-making.