Movie Review: ‘Passengers’ Out of This World Romance 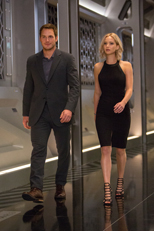 Out of this World Romance

Uniqueness in Hollywood can be a double-edged sword sometimes.

Often, Hollywood productions are so unique that they are just weird, forgetting that unique and good are not the same thing.

However, “Passengers” accomplishes the tall task of being unique and very good, becoming an out of this world romance, like a “Titanic” in orbit.

In “Passengers,” over 5,000 former residents of Earth, including Jim Preston (Chris Pratt) and Aurora Lane (Jennifer Lawrence) board a space vessel that will transport them to another planet called Homestead 2.

The only catch is that the trip will take over 100 years to complete.

To preserve life, the 5,000 passengers are placed into hyperbaric chambers where they can hibernate for a century, waking up the same age and condition they were in when they left Earth.

The trip on the Starship Avalon is supposed to be 100 percent safe, but when Jim’s sleeping chamber malfunctions he wakes up about 90 years too early.

Although he tries to go back into hibernation, Jim quickly realizes that it is a lost cause and spends an entire year by himself while the other passengers and crew members sleep for another 88-89 years.

After a year alone in space, Jim becomes fascinated with hibernating passenger Aurora.

He begins doing research on her while she sleeps, learning about her career as a writer and learning more about her personality.

Jim falls in love with the sleeping beauty and debates whether or not he should wake her from her slumber.

The lonely secret admirer knows that if he wakes her, he will ruin her life and her plans for an existence a century later on Homestead 2.

However, if Jim does not wake her from her hibernation, he might die early from loneliness and never know if the feelings could have been mutual.

With “Passengers,” screenwriter Jon Spaihts is able to combine two popular dramas (science fiction and romance) and film a great story that succeeds despite some predictable moments.

Pratt’s performance will make moviegoers empathetic and angry at the same time because people will understand his plight, but still not want him to have company in his misery.

“Passengers” has a bit of a science fiction “Titanic” vibe in that love is sometimes unpredictable and weird.

But true love is also worth dying for.

Lawrence is stellar as usual.  Moviegoers can feel why Jim fell in love with the sleeping Aurora and also feel Aurora’s pain because a complete stranger potentially ruins her hopes and dreams.

Fishbourne is his usual stellar self as well, despite a limited to role.

That uniqueness, along with other eccentricities, makes “Passengers” a great film.

In the mold of the 1994 classic “Jason’s Lyric” (gangster/romance) it gives stereotypical male and female audiences both something to enjoy.