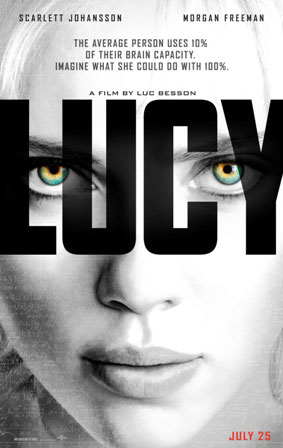 As Ricky Ricardo (Desi Arnaz) from “I Love Lucy” would always say on the hit sitcom, “Lucy you got some ‘splainin’ to do.”

The film “Lucy” does not fall into the category of predictable and formulaic, but filmmakers think too far outside of the box for moviegoers who enjoy a reasonable storyline that requires little explanation.

Scientists have often stated that human beings use only 10 percent of their brain capacity.

Although using only 10 percent of one’s ability is the epitome of underachieving, look at what man has accomplished with just a portion of his brainpower.

Man has flown to the moon; created the Internet, which has allowed the globe to become one global community and created the infrastructure for countless communities, cities and countries.

However, what could man accomplish if he used his entire brain capacity?  Not only could they control their body and mind, they possibly could control the mind and body of others around them.

Lucy (Scarlett Johansson), named after who scientist believe to be the first woman, is suckered into delivering a package to Mr. Jang (Min-sik Choi) by her boyfriend Richard (Pilou Asbaek).

Richard tells Lucy that it is only paperwork and that she will be paid $1000 for the delivery.  In order to make sure that she delivers the package, he handcuffs the briefcase to her wrist.

The content in the briefcase is actually a drug called CPH4 and after she successfully delivers the package to Mr. Jang, he hires Lucy and others to work for his operation.

His new employees have CPH4 embedded into their abdomen so that they can fly into various countries to deliver the drugs without being detected by authorities.

However, when the bag of CPH4 that has been embedded into Lucy begins to leak into her system she is able to utilize the majority of her brainpower, which allows her to put up a fight against her captors/employers.

“Lucy” is a beautifully shot film.

Whether one believes in the evolution of man or not, filmmakers take us on a journey from the first Lucy to Johansson’s Lucy.

The aerial shots of the countryside are simply breathtaking.

In a way, filmmaker Luc Besson is attempting to film evolution in the same way that Terrence Malik was trying to film God’s creations in the film “The Tree of Life” starring Brad Pitt.

Besson and Malik juxtapose a modern story filled with drama and action with scenes from creation.  “Lucy” is science’s version of “The Tree of Life.”

Unfortunately for “Lucy,” Malik’s film was a little too ambitious and so is Besson’s film.

Many fans will like the fact that Lucy is a butt kicking female warrior like many of Pam Grier’s characters during the Blaxploitation era, but the film is just a little too different.

Not even the legendary Oscar winner Morgan Freeman, who plays Professor Newman a leading scholar on the theory of evolution, can save “Lucy.”

The film is likeable but not lovable.

Unfortunately, with so many films proliferating the market during the summer success becomes almost like survival of the fittest and “Lucy” will find it hard to survive against more supremely developed films.