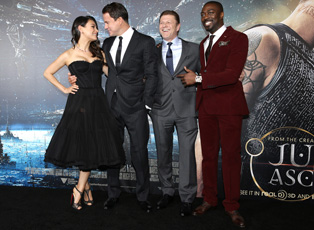 When my grandmother would ask her friend “Taloot” how her children were doing, “Taloot” would respond, “Miss Mazie, dem ole chillun gettin’ worser, and worser, worser.”

Educated people know that dem, chillun and worser are not words, but unfortunately I’m not educated enough to come up with adjectives to describe how bad “Jupiter Ascending” starring Mila Kunis and Channing Tatum actually is.

Unfortunately, “Jupiter Ascending” starts off bad and gets worser, and worser and worser as time goes on.

It is hard to follow the plot and even harder not to fall into a deep slumber.

Producers of “Jupiter Ascending” state that, “Unbeknown to Earth’s residents, life on Earth and countless other planets has been seeded by families of alien royalty for the purpose of harvesting the evolved living creatures once they reach a ‘Darwinian state of perfection’ to produce a type of youth serum that allows them to live forever.  When the matriarch of the House of Abrasax, the most powerful of the alien dynasties, dies her children Balem (Eddie Redmayne), Kalique (Tuppence Middleton) and Titus (Douglas Booth) are at war over the heir.  Eventually, a new heir comes to their attention; Jupiter Jones (Kunis), an unsuspecting Earth-living, unlucky caretaker of other people’s homes.  Jupiter encounters Caine Wise (Tatum), a genetically engineered interplanetary warrior, who came to Earth to reveal that her genetic signature makes Jones royalty and heir to Earth.  Meanwhile, he has to protect her from Balem, who put a bounty on her head and would rather harvest Earth than to lose it to Jones.”

It was necessary to use production notes to describe “Jupiter Ascending” because the film is all over the place and hard to follow.

However, even though the substance is missing from the movie, The Wachowskis are great with style.

The film is beautiful visually especially the candle scene.  Each planet is unique and visually appealing too.

Furthermore, the fighting scenes are adequate.

Unfortunately, that is where the compliments end.

The Wachowskis casted some of Hollywood’s most talented actors in Redmayne, Kunis and Tatum, but their talents are lost because of the lackluster script.

It does not help that the Wachowskis have “The Matrix” on their resume because all of their subsequent films will be compared to it and it is hard to live up to a classic.

When your first films are not your best, filmmakers like all professionals, have the luxury of getting better and better with their craft.

Unfortunately, when one starts their career so strong it is very difficult not to get worse because what goes up must come down.  As a result, “Jupiter Ascending” actually descends, not ascends.