Movie Review: All Lady ‘Ghostbusters’ Good for Some Laughs 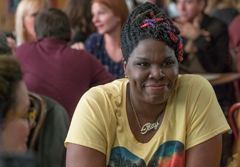 Actor John Amos (“Good Times”) might have had the right idea.

Hollywood might be creatively bankrupt and that is why the industry keeps remaking classic films from past decades.

The new “Ghostbusters” installment with an all-female squad of ghost fighters is good for some laughs, but the film is lightweight and will not compete with its predecessors.

In the new “Ghostbusters,” Erin Gilbert (Kristen Wiig) is on track to become a tenured professor at the prestigious Columbia University in the science department.

She is preparing for the process when a mansion is suspected of being haunted in the New York area and her book on the paranormal becomes popular again.

Even though she has tried to distance herself from the joke science of paranormal activities, thanks to childhood friend Abby Yates (Melissa McCarthy), the book is the first thing that comes up when Erin googles her name.

When Erin approaches Abby about taking the book down from the Internet, she is sucked back into her ghost chasing past when she accompanies Abby and Jillian Holtzmann (Kate McKinnon) to the suspected haunted house.

When their ghost busting video goes viral, Erin loses her teaching job and has to join forces with her fellow female Ghostbusters.

The Ghostbusters are out to prove that their discovery of the paranormal is not a figment of their imagination as Mayor Bradley (Andy Garcia) of New York City tries to crush their popularity and credibility.

The trio joins forces with subway transit worker Patty (Leslie Jones) and their new secretary Kevin (Chris Hemsworth), the male-equivalent of a dumb blonde and the organization is official.

McKinnon is the funniest lady in a film featuring comedy giants like McCarthy and Jones.

She steals the show in “Ghostbusters” from jamming “Rhythm of the Night” by DeBarge and thinking the song was actually recorded by Devo, to thinking almost dying is awesome.

Hemsworth shines while keeping the theme of gender reversal present in “Ghostbusters.”

He plays a dimwitted secretary who does not know how to answer the phone and leaves the office without doing his work in order to participate in a hide and go seek tournament.

Furthermore, the filmmakers realized there could not be a true “Ghostbusters” film without injecting some Ray Parker, Jr. music into the film.

However, there is not enough depth in the film.

Furthermore, critics who had a problem with the three White leading ladies playing scientists while the Black woman, Patty, worked at the subway station might have a legitimate beef.

But the jokes save the day for this much-anticipated film.

McKinnon’s performance should make her a household name for those who have not caught her on “Saturday Night Live.”

In addition, the film has cameos by original cast members Ernie Hudson and Dan Aykroyd.

But the fact that the film has female heroes does not make it a good film although some critics will disagree.

Nevertheless, the film has enough laughs to be watchable despite not having the depth needed to truly succeed.