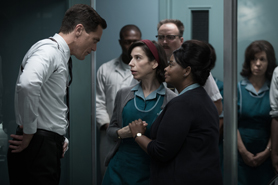 Weirdest, But Most Fascinating

The jury had already deliberated and announced their decision.

But in a court of law, anything can happen like an appeal or a pardon.

Luckily and unluckily for the past weirdest movies ever reviewed by RegalMag.com like “mother!” and “Ex Machina,” Guillermo del Toro’s new film, “The Shape of Water” might be the weirdest of the three.

Unfortunately for “mother!” and “Ex Machina,” del Toro’s “The Shape of Water” is uniquely brilliant and fascinating, while “mother!” was mediocre and “Ex Machina” had to settle for just good.

In “The Shape of Water,” Elisa Esposito (Sally Hawkins) is a complete outsider in her community.

Sure, there are people in her community that love and respect her, but most do not understand her.

Elisa is a mute janitor at a research facility, and really the only two people close to her are her co-worker, Zelda Fuller (Octavia Spencer, “Hidden Figures”) and her best friend, the eccentric artist, Giles (Richard Jenkins).

Although Elisa and Zelda’s job consists of cleaning urine and defecation when the men at the research facility miss the toilet, Elisa has a special gift that goes far beyond her job title.

Although she cannot speak, Elisa can hear and communicate.

Her gift of communication is not just reserved for human beings as that becomes apparent after the American research facility brings in a caged beast to help them develop the ability to survive on other planets and beat their Russian counterparts in the race to space.

It is Richard Strickland’s (Michael Shannon, “Boardwalk Empire”) objective to learn from the beast before destroying it.

However, via the communication talents of Elisa, Strickland’s nemesis at the research facility, Dr. Hoffstetler (Michael Stuhlbarg, “Boardwalk Empire”) discovers that the beast has the ability to communicate, learn and survive on Earth and is not just a guinea pig without feelings or emotion.

It is his desire to save the beast from destruction after the research is complete.

Further complicating the matter is the fact that Elisa and the beast form a unique attachment to each other, which puts the beast’s survival in further danger.

In “The Shape of Water,” del Toro gets superb performances out of all of his case members, especially Shannon and Academy Award winner, Spencer (“The Help”).

Fortunately or unfortunately, depending on perspective, Spencer has mastered portraying roles of a “servant” in a domestic capacity that possesses sass and attitude to perfection.

Fans know that Spencer can play any role to perfection, like a mathematician at NASA, but her performances in “The Help” and “The Shape of Water” have so much personality that hopefully it does not result in Hollywood typecasting the versatile actress.

Furthermore, Shannon has fell victim to the typecast bug as well.

But like Spencer, he plays his roles so brilliantly that it is hard to not place him in a box.

The one role that stands out from the rest in Shannon’s illustrious career is “The Iceman,” because in the role he was an evil rule breaker from the beginning, while in “Boardwalk Empire” he played the good guy, gone bad.

But the jury is definitely done deliberating about “The Shape Of Water.”

Shannon and Spencer do a marvelous job in their roles.

And del Toro does a masterful job with “The Shape of Water” in totality.