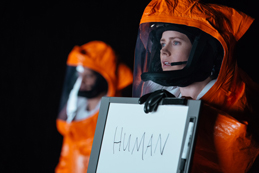 Throughout cinema history, moviegoers have often learned to fear an alien invasion.

In a universe so vast, many find it hard to believe that humans are the only species roaming the galaxy.

Humans often visit other planets in some form or fashion, so what would stop aliens from arriving on Earth?

And if and when aliens do arrive on Earth, how would humans understand the purpose of the alien visit, whether it is to declare war or peace?

Louise specializes in every language from Mandarin to Portuguese.

However, when Louise prepares to begin her lecture on the romance language of Portuguese she is interrupted by the texts and phone calls being received by her students.

One of her students asks her to turn the classroom television to a news channel.

What Louise and her students discover is perhaps one of the biggest fears of mankind, the arrival of alien vessels in cities throughout the world.

Thinking that the arrival of the aliens in 12 different worldly locations is a direct declaration of war, the world erupts into panic from violent retaliation to looting.

Not wanting to overreact to the arrival like America’s foreign counterparts, Colonel Weber (Forest Whitaker) recruits Louise to try to translate the alien language and scientist Ian Donnelly (Jeremy Renner) to learn more about the alien species.

It is up to the colonel and other American intelligence officers to help prevent the other countries from reacting too hastily to the aliens and setting off a world war.

Furthermore, it is up to Louise and Ian to try to communicate with and learn from the aliens from within the foreign vessel without upsetting them and also setting off a world war.

What they learn instead from the aliens is definitely the opposite of what has been taught from previous alien invasion flicks.

It is not a film for action or war movie connoisseurs

“Arrival” is a true film for science fiction movie lovers who are fascinated with cerebral films that are visually captivating while also making moviegoers use their brain.

Adams is great in a measured and philosophical role.

In addition, “Arrival” gives Renner a chance to shine in a cerebral role as well, giving him the platform to extend his repertoire past the physical, action type of performances he is famous for.

Whitaker, who is always phenomenal, gets to spread his wings a little too.

Unfortunately, “Arrival” will be too strange and too dull for non science fiction film lovers.

And while the film is a visual and graphic masterpiece, it is not good enough for the Academy Award winning predictions that some critics are giving the film.

Likewise, none of the actors’ performances equal Oscar worthy either.

Nevertheless, “Arrival” accomplishes its goal of making people think outside of their preconceived boxes.

What if aliens did arrive on Earth someday soon?

What would the aliens want?

How would human beings react?

And what would the results be after all is said and done?