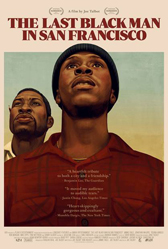 Many rap aficionados recognize the late 1980s to the early 1990s as the golden age of hip-hop music and culture.

Unlike the rap music of today, rap music during the golden age of hip-hop had something for everybody from the gangsta rap of N.W.A to the conscious rap of Public Enemy to the bubblegum rap of D.J. Jazzy Jeff and the Fresh Prince.

Well, this decade has to represent the golden age of Black cinema because Black films now come from all genres of film from suspense to horror to historical biopics.

“The Last Black Man in San Francisco” represents another brick on the house of Black cinema as it exquisitely captures the angst caused by gentrification and the so-called loss of the Black community.

The impact of gentrification represents nothing new in the Black community.

However, in 2019 gentrification has taken on more scrutiny because of the whitewashing of historic Black areas like the neighborhoods surrounding Historically Black Colleges and Universities like Texas Southern University in Houston’s Third Ward and Howard University in the nation’s capitol.

Areas of town that once represented the Black diaspora in its entire splendor have given way to high rises and dog walking parks on actual college campuses.

Families that have lived in areas like Third Ward and Houston’s Midtown (or Fourth Ward or Freedmen’s Town) find themselves losing their property, identity and community as home values skyrocket, blasting property taxes well out of the reach of those who called the neighborhood home for decades.

Inner cities have now become too expensive for many minorities to live in and “The Last Black Man in San Francisco” represents that painful reality for people of color who love their urban neighborhoods and hometowns.

In “The Last Black Man in San Francisco,” Jimmy Fails (played by Jimmy Fails himself) has basically become homeless because of gentrification and other factors.

Jimmy spent his childhood in and out of group homes.

Now, Jimmy has found a temporary home sleeping on the floor of his best friend Montgomery’s (Jonathan Majors) house.

Although Montgomery has no problem being there for his best friend, he also has a lot on his plate trying to make a life for himself in the San Francisco area.

Montgomery works for a seafood market.

But his true dream is to become a successful playwright.

The future playwright has material all around him from the dope boys in the neighborhood to the changing face of San Francisco.

He has to take care of his blind grandfather Grandpa Allen (Danny Glover) while trying to find his place in a world that considers him an eccentric outsider.

Despite it all, Montgomery always has time for the people that mean the most to him.

Montgomery is a ride or die friend like two other close friends that came from San Francisco (former NFL players O.J. Simpson and Al Cowlings), but in a less sinister way.

Jimmy always has his best friend by his side when he visits his old home in the heart of San Francisco.

His dad lost the old home back in the day.

But it is Jimmy’s dream to get the house back for his family one way or the other.

His grandfather built the home by hand back in the 1940s and Jimmy is disgusted that the new owners have let the house go.

Jimmy even takes it upon himself to paint someone else’s home and work in someone else’s flowerbed until he gets the house just the way his grandfather wanted it.

When a tour guide bring visitors to the old historic San Francisco home, Jimmy even corrects the tour guide when he tells the tourists that architects built the house in the 1800s.

Jimmy corrects the tour guide telling him that his grandfather built the house by hand in the 1940s after the American government forced Japanese residents out of the neighborhood and into the internment campus during World War II.

But when the current residents get kicked out of Jimmy’s grandfather’s old home after an estate dispute with their siblings, Jimmy sees it as an opportunity to reclaim what rightfully belongs to his family.

With the help of Montgomery and his aunt Wanda (Tichina Arnold), Jimmy moves his grandfather’s old belongings back into the house and begins squatting in his “birthright.”

When Jimmy finds the house up for his sale, he immediately takes interest in buying the house.

The only problem is that the homes are now worth a lot more than when the neighborhood consisted of predominantly Black families.

Furthermore, Jimmy is still technically homeless with no real income.

Even with steady income, the $4 million asking price of the home is something that he cannot afford, unless he miraculously gets a contract from the Golden State Warriors or San Francisco 49ers.

Despite the obstacles, Jimmy still is determined to get the money to repurchase his grandfather’s house.

However, when new information gets revealed about the house the new facts challenge how people define home and ownership.

First of all, “The Last Black Man in San Francisco” defines the Black art house movie.

The character Montgomery has to be the weirdest cat in the history of Black movies.

But Montgomery represents something common in many Black communities.

He is a person that does not fit into his ghetto surroundings and dances to the beat of his own drum.

But what is most impressive about Montgomery is the fact that he is totally comfortable in his own skin while his other peers struggle to find acceptance pretending to be something that they are not.

Casual moviegoers might not understand some of the nuances and imagery of the film.

Nevertheless, “The Last Black Man in San Francisco” powerfully attacks the concept of gentrification by artistically asking the questions: what constitutes ownership and what constitutes community?

Is something really ours if we did not own it originally?

And is the Black community limited to geography or a specific neighborhood?

Most brilliantly is the fact that fans of “The Last Man in San Francisco” might interpret the message of the film differently, like a great poem.

And like true poetry represents the pinnacle of creativity, the new generation of Black films like “The Last Black Man in San Francisco” represent what is golden about Black filmmakers and artists.