Movie Review: ‘The Art of Self-Defense’ Can’t Be Defended 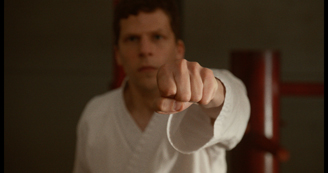 Jesse Eisenberg tries to put up a fight in “The Art of Self-Defense” (Photo Credit: Bleeker Street).

The Art of Time Wasted

Approximately two hours worth of time can result in a lot of accomplishment.

One can watch paint dry or stab themselves in the hand with pencil for two hours.

Or one can watch “The Art of Self Defense,” but RegalMag.com will not say which of the three aforementioned options represent the most fun.

The above statement is intended to be sarcasm and not meant to actually be as harsh as it seems.

But, the art of sarcasm is one of the few bright spots in “The Art of Self Defense.”

In “The Art of Self Defense,” Casey (Jesse Eisenberg, “The Social Network”) has mastered having big fun.

That was sarcasm too.

He teaches himself the French language in his spare time.

His only friend is his pet dog.

And he is the goody two shoes at work.

When his co-workers want to punch their boss in the face or burn his house down, Casey is the one who tries to talk them off the ledge because the boss has a newborn in the house, like that really matters when one is mad at their boss.

That is more sarcasm.

But Casey’s zeal for life abruptly halts when he gets attacked one night after purchasing dog food for his furry friend.

Initially, a person on a motorcycle with his face covered drives by Casey and asks if he has a gun.

Perplexed by the odd question, Casey ignores the stranger and continues on his way back home.

But before Casey can return to his home, a gang of disguised motorcyclists returns to his location and assault him to the point that he needs serious medical treatment.

The beat down leaves the 35-year-old Casey in the hospital in critical condition.

Although his beloved boss gives him as much time off to heal from his injuries, Casey still cannot get the assault and battery out of his mind.

He knows he needs to protect himself, but does not know the best way in which to do so.

Casey could buy a gun, but he does not know much about guns.

Furthermore, as a gun salesperson tells him, having a gun in a home increases the chance of suicide and increases the likelihood of a child accidentally shooting him or herself.

But as the salesperson tells Casey, the fact that he does not have children would make that bit of information irrelevant.

Casey informs the gun salesperson that he would prefer a gun that can fit inside his hand.

The gun salesperson replies that Casey is looking for what is called a handgun.

Casey decides to purchase the first handgun that the salesperson shows him because it fits nicely into his hand.

Only one problem exists as it pertains to Casey’s gun purchase.

The law requires a waiting period in order for background checks to clear before someone can lawfully purchase a firearm.

While waiting patiently for his background check to clear, Casey stumbles upon a martial arts school and decides to sign up for classes.

One of the school’s mottos is that guns are for the weak.

And according to the school’s Sensei (Alessandro Nivola), guns do not alone represent the only thing that is weak as it pertains to Casey Davies.

First of all, the name Casey Davies seems like a woman’s name according to Sensei.

Even the gun salesperson thinks he is calling a woman when he calls Casey to tell him that he has passed the background check required to legally purchase the handgun he selected weeks earlier.

Furthermore, when Casey tells Sensei that his favorite genre of music is adult contemporary, Sensei tells him that that is feminine too.

When Casey tells Sensei that he is learning French with hopes of visiting France one day, he replies that French culture is soft and that Casey should embrace German or Russian instead.

According to Sensei, German and Russian cultures are often seen as strong in comparison to their “softer” European neighbors.

Additionally, Sensei likes the fact that Casey’s dachshund is of German descent, but prefers a German shepherd instead because of it strength and viciousness.

In “The Art of Self-Defense,” Sensei begins a transformation in Casey.

He no longer is the timid and soft-spoken Casey from the accounting department at his firm.

Casey is a bada$$ who takes no junk from anyone, not even his boss.

He puts hands on his boss, leaving him in pain on the office floor.

Sure, he loses his job but he earns the respect of all of his former colleagues.

He even starts bullying his colleagues out of their chairs in the company’s break room.

However, when Sensei’s teachings become more sinister by the day, Casey rethinks everything that he has learned from Sensei when it comes to the art of self-defense.

“The Art of Self-Defense” benefits from the great sarcasm in the dialogue.

But that is not enough to defend “The Art of Self-Defense” against its self-inflicted wounds.

The storyline in “The Art of Self-Defense” is simply not lively enough to entertain for an entire feature length film.

But the casting in “The Art of Self-Defense” is done brilliantly because of the casting of Eisenberg in the lead role of Casey.

Eisenberg has mastered the sarcastic, awkward, nerdy and eccentric character.

Although “The Art of Self-Defense” could never compare with his ultimate performance as Facebook co-founder Mark Zuckerberg in “The Social Network,” Eisenberg knows his niche and has mastered that niche.

But unfortunately, two hours with Eisenberg should be spent watching the classic “The Social Network” and not with “The Art of Self-Defense.”