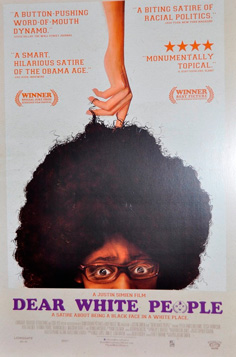 Robert Townsend’s satirical comedy “Hollywood Shuffle” struck a chord in Black Hollywood for so many reasons when it debuted in 1987.

Black Hollywood always had the slapstick comedic genius of Redd Foxx, Flip Wilson and Richard Pryor, but Townsend’s groundbreaking picture represented a departure for Black comedies that only represented a few laughs.

“Hollywood Shuffle” made the entire entertainment industry think about its stereotypical depiction of African Americans, but in a way that made one question their own prejudices while making one laugh in the process.

The fictional Ivy League campus of Winchester University is a virtual microcosm of the world in 2014.

Many, like President Fletcher (Peter Syvertsen), believe that racism is a thing of the past, but underneath his denial sits a campus on the verge of a race war.

Winchester has just implemented the Randomization of Housing Act, which is a veiled attempt to break up the only predominately Black residence hall on the campus.

Samantha (Tessa Thompson, “For Colored Girls”) has been drafted by the Afrocentric leaders on campus to run for head of house at the predominately Black residence hall in an attempt to maintain the one place on campus where Black culture is celebrated and appreciated.

Sam has made a name for herself at Winchester because of her “Dear White People” radio show where she uses her platform to blast the school’s treatment of Black students, while informing White people that there is a two Black friend minimum required to not be considered racist.

When she somehow beats Troy (Brandon P. Bell), the more “acceptable Negro,” for the position of head of household she is pressured by her comrades to protest the school’s administration and the annual Halloween party, which is nothing more than a yearly mockery of the Black race consisting of every stereotypical character in Black history.

Ultimately, the Halloween bash is a microcosm of just how much of a race problem there is in America and what some of the consequences are if we are not able to freely address our differences.

“Dear White People” is an intelligent, thought-provoking and often downright hilarious satire on the race problem in America.

Not only is it genius because it turns a mirror on the White community and the false belief that racism is over.  But it turns the mirror on the Black community and addresses some of our issues of self-hate and finding acceptance in a world that does not fully accept you because you are Black, and a Black community that does not always accept you because you are not considered Black enough.

Haters describe Sam as the angry offspring that Spike Lee and Oprah Winfrey would produce if they ever had a child.

But behind her Angela Davis-like façade is a young lady battling identity issues because of her mixed racial heritage.

Her undercover White boyfriend Gabe (Justin Dobies) even asks her how long does it take for her to get her straight hair to look like the hair of her Black friends.

Sam’s anger at the White man is really anger at her White heritage and a result of her overcompensating for her light skin and straight her.

When he finds some White friends he has to deal with them always wanting to touch his hair for some reason.

Lionel jokes that his hair is like a black hole for White people’s fingers.

When racial tensions reach a boiling point in “Dear White People,” various news outlets refer to Black run-ins with White classmates as a riot and not a misunderstanding or a simple youthful mistake.

The underlying messages of “Dear White People” are to be you and not worry about fitting into a particular demographic.  But it also is a much-needed message that one does not have to wear a White sheet and burn crosses to be racist.

Those stereotypes that some belief are gospel is the epitome of racism and “Dear White People” does a masterful job of tackling a heavy subject in a light-hearted manner.