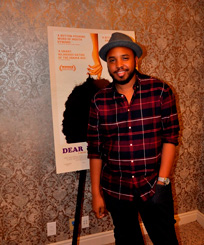 Make Room for the Next Spike Lee

When Spike Lee first hit the scene with “She’s Gotta Have It” in 1986 he did not initially feel embraced by the Hollywood establishment.

“She’s Gotta Have It” faced criticism for the so-called over sexualizing of Black women.

His sophomore effort “School Daze” (1988) endured criticism for airing the Black community’s dirty laundry when it came to colorism.

And “Do the Right Thing” and “Mo’ Better Blues” were seen as racist and anti-Semitic.

But that criticism eventually turned into understanding and dialogue about race relations.  Now Lee is regarded as one of the godfathers of Black cinema.

In a country that falsely promoted the notion of a post-racial America, the filmmaker is making it clear that in some ways our old prejudices are new again.

Justin Simien’s mission is to hold up a mirror to America’s shortcomings on race and race relations, and challenge the belief that the Black movie-going audience is one big happy monolithic group.

RegalMag.com recently sat down with Justin Simien to discuss his new film, as well as his opinion on the entertainment industry and Tyler Perry films.

Justin Simien: I will say there are certainly members of the Black movie-going audience that didn’t know what to do with the movie at first because it didn’t look like, frankly, what we’ve been fed for the past 15 or so years.  One of the things…we were talking about (Monday) in Chicago was that it took Spike (Lee) like three movies.  I took “She’s Gotta Have It,” “School Daze” and then “Do the Right Thing” before “ooohh, got it, Black movies can be like this now.  Got it.  OK, cool.”  And then you had Robert Townsend, and then you had “Love Jones,” and then you had the 90s where Black films were like everything.  You had Black horror movies.  You had the street stories. You had the comedies.  You had the spoofs.  You had everything.  You had the love stories.  I think there also (are members) of the Black community that (are) SO thirsty for something different…So I think that it’s true that there are some members of the Black movie-going audience who are like this is nothing like “Think Like a Man.”  You know, “where’s Kevin Hart?”  And there are members of the Black audience that are like, “thank God this is not ‘Think Like a Man.’” I think we’ll get both of those when people see the film.

Regal Mag: In the film there is a funny scene at the theater when the students wanted to see more than a Madea film or a film featuring 2 Chainz.  How much responsibility do you place on Black consumers versus Tyler Perry for not giving us diverse images of ourselves on screen?

Justin Simien: I don’t put it on Tyler at all, actually.  And I don’t even fully put it on the consumer.  Actually, I put it on the industry.  We don’t really live in a world where Hollywood sort of makes movies because they love movies.  It’s a commodity.  They create products for monolithic people.  And if they can’t figure out the nuances of an audience, there just not gonna make movies for it.  That’s really the problem.  When Tyler Perry came along, Black films in general had kind of died down.  And the studios had kind of stopped trying to figure out how to make movies for Black audiences.  Then Tyler came in with an audience already.  He was already a playwright.  He had already kind of amassed his people.  And he came in with a tailor-made audience, and Hollywood was like “OK, cool, let’s make that now and nothing but that.”  That was the problem.  Tyler Perry finding an audience and buying an island off of the money he made by making movies for the audience, I actually have no problem with that.  The problem I have is that the industry then said, “OK, cool that’s all they get.”  Because, I didn’t see myself in those movies.  I saw myself in movies that didn’t have any people of color more than I saw myself in a Tyler Perry movie.  But that’s OK.  Tyler Perry doesn’t have to make movies for me.  Just like I don’t have to make movies for people who want to see his movies. It’s not his problem.  It’s the culture and the industry around him that’s the problem.

Regal Mag: How important was it for you to portray Samantha’s struggle with her racial identity in the movie?  Many of us know a person in the Black community who appears militant in public but is secretly dating a White person behind closed doors.

Justin Simien: We often have a light-skinned Black woman in the leading role in a Black film but her heritage is never discussed.  The conflict of having a Black parent and a White parent and what that does to you in this society is never discussed.  Tessa (Thompson), who is of mixed race (and) who plays Sam, she describes whenever she’s cast and her parents are also in the movie, they always don’t know what to do.  They never cast a Black person and a White person.  It’s always two light-skinned Black people.  Because they want to act as if there’s just nothing complicated about that experience.  She’s light-skinned let’s just move on.  And I thought it would be really interesting to…get into that because it’s never really gotten into.  And because I wanted to get into this thing about being authentically this or authentically Black and show the struggle with that.