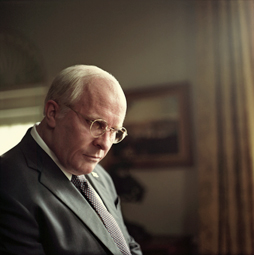 Even to those that describe themselves as politically engaged, former Vice President Dick Cheney remained an unknown even during his time at the White House.

However, a wise man once warned people to watch the quiet ones because they always present a danger because a person will never know their next move.

“Vice” captures the quiet ruthlessness of Vice President Cheney as Christian Bale (“The Big Short”) embodies the political king maker from Wyoming, from his look to his demeanor to his voice.

To put it bluntly, Cheney always seemed like an odd choice for vice president under former President George W. Bush.

The future vice president had a world of experience, but no charisma.

And the future president had the right pedigree and personality, but not as much experience as his second in command.

Political insiders and pundits often stated that the V.P. from 2001-2009 called all of the shots in the White House, while President Bush became the figurehead.

But what seemed baffling was why would Bush give his assistant so much power and control?

It seemed that a true leader would scoff at such an arrangement and Bush always seemed like a born leader whether or not a person agreed or disagreed with his politics.

But what is intriguing in “Vice” is how similar Cheney’s rise to the top of the political mountain was to Bush’s ascension to the White House.

Both men had a tumultuous tenure at Ivy League colleges.

Cheney flunked out, while Bush allegedly “C’d” (made a lot of C grades) his way through Yale University.

Both future political powerbrokers could not cut it working on a real job. Cheney laying power lines in Wyoming and Bush working on the oilrigs in hot and humid Texas.

But both Cheney and Bush had people in their families that would not let them settle for mediocrity.

And Cheney had his demanding but dedicated wife to force him to achieve greatness.

But what Cheney did not have that Bush benefited from was having family within the political elite of America.

Cheney had to work his way into the elite of America, and he did so by any means necessary.

In “Vice,” Cheney finally gets his shot at a real career when he takes an internship with Donald Rumsfeld (Steve Carell, “Welcome to Marwen”).

Proving himself loyal, hardworking and quiet, Cheney rises through the political rankings until he has a prime spot working in the administration of President Gerald Ford.

When President Richard M. Nixon resigns after the Watergate scandal, many Republicans saw their careers ruined by the controversy.

However, Cheney saw President Nixon’s resignation as an opportunity at advancement for Republicans not tainted by the Watergate investigation.

Unfortunately for Cheney in “Vice,” he almost immediately sees his new power evaporate after the election of President Jimmy Carter in 1976, the man who would unseat President Ford in the White House.

Never one comfortable in the limelight, Cheney struggles in front of crowds as he runs for political office.

In that way, Cheney is like the late and former President George H.W. Bush.

Both are held in high esteem amongst their conservative colleagues.

However, both seem aloof at times and uncharismatic at other times, which does not always bode well for a political candidate trying to woo the common man and common woman.

But what Cheney does possess is a heartless desire for power so that he can shape the country in his own conservative image.

And in “Vice,” Bale portrays those evil qualities brilliantly.

What stands out in “Vice” is the quality makeup work done to age Bale realistically as he portrays Cheney at different stages in his life.

Although many movie buffs do not care about such technicalities as makeup, when makeup is bad it often takes away from what could have become a great film.

In “J. Edgar,” Leonardo DiCaprio’s makeup was so bad that it was hard to take his performance seriously even though he did a stand up job portraying former FBI director J. Edgar Hoover.

But in “Vice,” Bale only has to worry about becoming the political powerhouse from Wyoming, because his makeup job does not look like just makeup at all.

Bale simply looks like Cheney as he progresses in age.

His performance is not Daniel Day Lewis in “Lincoln.”

But it has to be in the ballpark with Josh Brolin in “W.”

They say behind every great man is an even greater woman, and Lynne is arguably the inspiration behind all of Cheney’s success in the political arena.

But what separates “Vice” from “W.” is the quirkiness of the Cheney biopic.

The filmmakers are able to put in some comedic and satirical moments in the film despite the film focusing on war and terrorism at times.

Rumsfeld even laughs at Cheney when Cheney asks his boss what do they actually believe in as if to say their principles do not really matter.

The only thing that truly matters is obtaining and maintaining true political power.

And that is something Cheney does for the Republican Party by utilizing the unitary executive order, which basically means that the executive branch of the United States government is above the law especially when they are doing something that benefits the country.

But while Bale and Carell were great castings in “Vice,” casting Tyler Perry as Colin Powell just does not seem believable.

Perry is a great talent and the most important African-American filmmaker in the 21st century because of all of the opportunities he provides for Black talent. But it is hard to not see him as Perry or Madea when watching him in “Vice.”

The mogul has done outstanding work starring in other filmmakers’ movies like in “Gone Girl.” But portraying such a larger than life figure as Powell is something totally different.

But the most important casting is of course the casting of the lead character.

Thanks to Bale’s performance, people will finally get to somewhat know Cheney, the good, the bad and the evil.