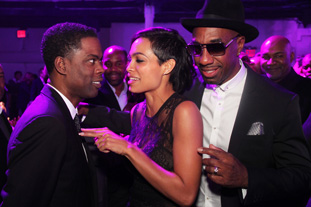 Chris Rock has finally found redemption from those travesties known as “CB4” and “Pootie Tang.”

As a stand up comedian, he is one of the “baddest” brothers on the planet.  But in the past, some of his theatrical movies were just bad, not Michael Jackson bad, but Philadelphia 76ers almost winless bad.

However, with “Top Five,” Rock has written an elegant, thought-provoking, star-studded hilarious film that puts him alongside co-stars Kevin Hart, Cedric the Entertainer and Tracy Morgan on the top of the comedians’ Mt. Rushmore.

If Rock has a top five list of his films, “Top Five” is number one, two, three, four and five.  It is just that good.  And that is just rigorous honesty as is said in the film.

In “Top Five,” Andre Allen (Rock) is tired of being placed in Hollywood’s box.

Beginning his career as an alcohol-induced stand-up comedian, Allen becomes a box office sensation with the fictional “Hammy the Bear” action flicks.

Although he longs to be taken seriously as a respected thespian, he cannot escape being typecast as Hammy the Bear.

It’s virtually “Hammy Time” every time he walks the streets of New York as fans refer to him by his character’s name and not his government name.

His latest film “Uprize” about a Haitian slave revolt is being ignored at the box office and all people want to know about is his upcoming nuptials to Bravo reality star Erica Long (Gabrielle Union).

Like any other celebrity, doing press is a necessary evil.  Celebrities want the publicity that can be gained through positive press but many dread the relentless criticism from some of the industry’s toughest journalists.

Chelsea Brown (Rosario Dawson) of the New York Times desperately wants an in-depth feature on Andre but because of harsh words by a New York Times film critic, Andre is reluctant to trust one of the critic’s colleagues with his story.

The interviews become an in-depth look at what made Andre Allen the star that he became and what contributed to his disconnect from his fans and his declining career.

With a who’s who cast including Hart, Morgan, Cedric the Entertainer, DMX, Jerry Seinfeld, Adam Sandler, Ben Vereen, Whoopi Goldberg and Sherri Shepherd, never has so much talent collaborated for 101 minutes of laugh-out-loud comedy.

It is something special to see Seinfeld making it rain at a bachelor party or list his five favorite rappers, which for some strange reason includes Sir Mix-a-Lot.

Cedric the Entertainer is a syrup-sipping, perm-wearing pimp of a promoter named Jazz Dee and the self-proclaimed (expletive) man in Houston.

His role is genius, but I have to correct my fraternity brother because I am the (expletive) man in Houston.

Despite the hilariousness, there are some predictable moments in the film and that is the only thing that prohibits it from reaching comedy perfection.

Nevertheless, Rock is able to silence his critics permanently with this production.  In the past, I was his real-life harshest critic, but now times have changed and I have been converted into a Rock film fan.

Rock has always been an introspective comedian, tackling race, politics and other social issues throughout his distinguished career.

With the country at a racial boiling point, his brand of comedy and films like “Top Five” are right on time.

With this film, that he also wrote and directed, Rock is once again able to make people laugh while making them think.  That winning formula is why he once again is the (expletive) man in Hollywood.