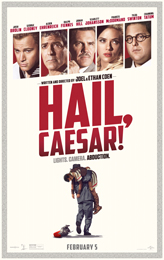 But like in any all-star game, such as the NHL or NBA All-Star Game, there is always a star amongst stars, the game’s Most Valuable Player (MVP).

And just like any all-star game, the games themselves can be uncompetitive and just average entertainment.

“Hail, Caesar” is average entertainment.  But the movie does have one shining star.

The movie directed by the Coen brothers (Joel and Ethan), focuses on Eddie Mannix (Josh Brolin), the head of Capitol Pictures.

Although to some he has a dream job working with movie stars on motion pictures, his life is filled with daily confessions at church, daily cigarettes and daily pimp slaps of disobedient actors and actresses.

He has a job offer from Lockheed, which would give him more hours with his wife and children.

However, the job might not give him the fulfillment that Hollywood does.

Simultaneously, he has multiple films shooting at the Capitol Pictures sound stages and not enough talent to finish the projects.

The group The Future has kidnapped actor Baird Whitlock (George Clooney) the star of “Hail, Caesar!” during the middle of production.

Director Lawrence Laurentz (Ralph Fiennes) needs another male star to complete the movie that he is working on.

Mannix recommends Western movie star Hobie Doyle (Alden Ehrenreich) even though he cannot act, cannot pronounce the director’s name and cannot avoid looking into the camera during a shoot.

Actress DeeAnna Morgan (Scarlett Johansson) is pregnant and has a pretty good idea of who the father is.

And Mannix is trying to make the portrayal of Jesus Christ in “Hail, Caesar!” as accurate as possible.

To do so, he has brought together religious leaders from various faiths like Christianity and Orthodox Judaism, even though Orthodox Jews do not believe Christ is God in human form.

Those meetings only lead him to more cigarettes and confessions.

Although “Hail, Caesar!” is not the best film in the world by any stretch of the imagination, Ehrenreich steals the show with his portrayal of the clueless actor, singer and cowboy Hobie Doyle.

As critics, we often denigrate actors who aren’t the most talented and wonder how they have so much success in Hollywood with so little ability.

In “Hail, Caesar!” Hobie Doyle is proof that we owe all of them a sincere apology.

Hobie’s lack of talent is what makes the movie hilarious at times.

He is to acting what Randy Watson (Eddie Murphy) was to singing in “Coming to America.”

In the illustrious words of Mr. Clarence (Murphy) from “Coming to America,” that boy is “good and terrible.”

Unfortunately, despite the humor and cleverness of “Hail, Caesar!” too many scenes are a bit too silly.

One of Channing Tatum’s (Burt Gurney) scenes at the end of the film is particularly too silly.

Furthermore, there are too many moving parts (i.e. too much going on) in “Hail, Caesar!” to focus on the main plot of the story.

There are appearances from stars like Jonah Hill, Tilda Swinton and Frances McDormand.

But the true shining star is Ehrenreich and he needs the ball in his hands more than the Coen brothers give it to him.