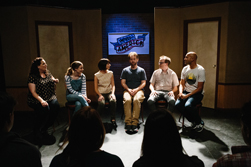 What About Your Friends

Achieving one’s dreams can prove just as challenging as pursuing those dreams.

Many future stars, with dreams of taking over the entertainment industry, foresee the day that their success will lead to the success of their friends.

However, life rarely works that way.

James Brown had to leave the original Famous Flames to become the “Godfather of Soul.”

Rapper The D.O.C. left his group the Fila Fresh Crew on the advice of producer Dr. Dre.

And in “Don’t Think Twice,” a group of improv actors get left behind when one of their members makes it big on the show “Weekend Live” but cannot provide an opportunity for them to join him on the show.

The film “Don’t Think Twice” begins with a brief overview of improvisational comedy, which traces its origins to Chicago in the 1950s.

Improv is basically freestyle rapping for comedians in which they take a topic and begin creating jokes off the top of their head.

Jack (Keegan-Michael Key, “Key and Peele” and Samantha (Gillian Jacobs) are the “it couple” within the improv team known as The Commune.

They are able to maintain a professional and romantic relationship even while living in a college dorm-like atmosphere with the rest of their group members.

The Commune members are all in their 30s and are still chasing their dreams of bright lights and celebrity.

Fans love their improv act, but their careers are put in jeopardy when the club they perform in, Improv for America, chooses to shut its doors in favor of another New York City Donald Trump building.

Knowing that the end is near, The Commune still yearns for the day that they can join “Weekend Live” and become household names in the comedy world.

When Finn (Steve Waltien) from “Weekend Live” catches one of The Commune’s shows, it leads to auditions for a couple of members of the team.

However, when that success does not trickle down to the rest of The Commune, the star of the team begins to realize who his real friends are and how fickle friendships can truly be when one friend begins to outgrow the rest.

The film impressively deals with the stress of success along with the reality of unrealized dreams and destroyed hopes.

In impov, comedians are told that they should not think twice because there are no mistakes in improvisational comedy.

And when success knocks at one’s doorstep, that person should not think twice about answering the call and should not look back at those he/she has to leave behind.

Key shows depth as an actor.

His comedy has always been on point, but “Don’t Think Twice” is a great progression for his career because its subject matter is something he has probably had to face firsthand.

Unfortunately, “Don’t Think Twice” drags a bit at times and moviegoers will get tired of The Commune members asking the audience if anyone has had a bad day.

Nevertheless, the cast of “Don’t Think Twice” gives very empathetic and nuanced performances of those waking up from their dreams and realizing they have only been dreaming all of these years.