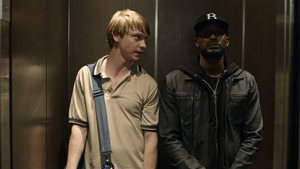 The hood famous website UrbanDictionary.com defines the term “bodied” as, “when someone gets utterly destroyed in something they are competing at.”

Sure, gladiator sports like boxing, mixed martial arts and even football provide athletes with opportunities to bludgeon their opponents to a bloody pulp on any given day.

However, no competitive sport allows a person to take an opponent to pieces with their own vernacular, wit and creativity like battle rap and permanently damage careers.

The satirical film “Bodied” attacks the genre of hip-hop with its use of racist, sexist, misogynistic and homophobic language as a whole with great dialogue, great battles, great intellect and great talent in front of the camera.

In essence, “Bodied” puts rap music on full blast with its criticism.

Many people criticize the genre for its promotion of drugs.

When many think of hip-hop, many visualize ex-cons or street pharmacists who took their illicit funds and poetic talent and turned those qualities into a lucrative business.

But many hip-hop artists and entrepreneurs like David Banner, J. Cole, Talib Kweli, Chuck D of Public Enemy and many others posses college degrees, and sometimes contradict the negative stereotypes that many have about rappers and executives in the hip-hop industry.

In “Bodied,” Behn Grymm (Jackie Long, “ATL”) has the lyrical prowess to go toe-to-toe with the most vicious battle rappers, but also possesses an intelligence that allows him to go blow for blow with a graduate student working on his dissertation about battle rap.

Adam (Calum Worthy) is a graduate school student desperately wanting to interview and befriend Behn Grymm to get a better understanding of the hip-hop scene in Oakland, Calif. and the battle rap sport in general.

In a show of his stereotyping, Adam is immediately taken aback when he learns that Behn Grymm actually knows what a dissertation is in the first place.

Even though Behn Grymm and Adam are the ultimate odd couple, a mutual respect and friendship develops between the two polar opposites.

And when Adam is challenged to battle a corny White rapper in the parking lot after watching Behn Grymm battle, the graduate student realizes that his affinity for hip-hop is much deeper than just fandom.

Adam actually has bars (also known as good lyrical content) and has the talent to stand toe-to-toe with some of the fiercest battle rappers in the game.

His dreams of pleasing his college professor father turns into pursuing a career in the lucrative battle rap scene.

In “Bodied,” Adam initially comes across as the “woke” White boy who enjoys hip-hop music and minority culture and leans left politically.

But when he has to battle emcees in a culture dominated by minorities, he proves that he has slept on many of his hidden racist, misogynistic, sexist and homophobic feelings.

When Adam bodies his opponents in “Bodied,” he often relies on lazy stereotypes about minority groups like women, African-Americans and Asians instead of getting more creative with his subject matter.

“Bodied” in essence holds up a mirror to hip-hop culture, which faces justified criticism for some of its subject matter and lyrical content.

Furthermore, “Bodied” is a satirical critique on hip-hop’s mantra of keeping it real.

Hip-hop has always produced larger than life characters whose images did not match their real life personas.


Knight actually played football in college at University of Nevada at Las Vegas (UNLV) before enjoying a brief stint in the National Football League as a replacement player during the strike-affected football season of 1987.

Nevertheless, the images that aforementioned icons cultivated became the truth.

Likewise, Behn Grymm is not as grim as his battle rap reputation would suggest.

He is a family man.

He has a decent day job.

And he just wants the battle rap money to help his family with unfortunate expenses.

Behn Grymm epitomizes the term code switching; meaning people of color act and talk one way in the hood and a totally different way in corporate America.

However, in the crazy world of hip-hop living like an upstanding citizen can seem corny.

Rappers like 50 Cent, The Game and the late, great Tupac Shakur got more praise in some circles for getting shot multiple times than David Banner did for receiving his Masters degree and trying like hell to uplift the African-American community.

Those backwards priorities that exist in the hip-hop community exist in even more unfortunate ways in the African-American community.

A drug dealer gets respect in the hood.

A man who cheats on his wife gets respect in the hood.

And a man who shuns intelligence, knowledge and educations gets more respect often in the hood.

Just as unfortunate, hip-hop can become so competitive that friends can become enemies in the name of hip-hop.

Once friends, Shakur and The Notorious B.I.G. lost their lives before they could squash their beef.

Even close friends Kurupt and Daz Dillinger from Tha Dogg Pound once fell out before reconciling and getting back together.

While nothing is usually off limits in a rap battle, “Bodied” shows that some beefs can go way too far, especially when the battle never should have gotten personal in the first place.

UrbanDictionary.com defines squash as, “to put an end to or to resolve.”

And the O.G.s in The Bronx, N.Y. created hip-hop culture to stop beefs, stop violence and to stop stereotypes of urban youth of color.

Hopefully, “Bodied” puts the mirror up to hip-hop and encourages the gatekeepers of the culture to squash the nonsense and “body” the negativity that has come with the culture.