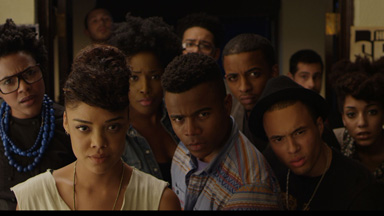 To Whom It May Concern:

You have not seen anything until you have seen the DVD of “Dear of White People” and all of the funny outtakes and serious discussions on race that happened on the set of Justin Simien’s first film.

Unlike many other films, the special features included in this DVD are just as poignant and funny as the film itself and it is highly recommended that Black people share these special features with their White friends, co-workers, neighbors and acquaintances.

If you do not share the special features of “Dear White People” with your White brethren, how would they know that saying What’s up my brother, if they do not really talk like that, is highly offensive?

How would they know about the Black PSAs that educate Whites on the truth when it comes to race and culture in this country?

Sharing allows them to know that in modern times, Whites eat more watermelon than Blacks.

And although the stereotype of Blacks loving chicken has been around since “The Birth of a Nation,” everyone actually loves chicken.

If you do not share with others, how will White Americans know that Blacks want to laugh at weird White baby names too?

Sure, L-A (pronounced LaDasha) and Latipaquanda (pronounced La-Tip-a-Quanda) nem (and them) are ghetto as all outdoors, but White people should not get a pass when they name their kids Satan, Apple or Pilot Inspector.  Those are real White baby names too.  You cannot make any of this up.  No writer is that talented or creative.

People need to know that knowing all of the lyrics to Lil Wayne songs does not make one open-minded in regards to race relations.  They are just admitting how many times they say the N-word when no one is around.

Most importantly, they won’t know about the racism insurance they have at their disposal to get them out of awkward situations when they say the wrong thing about Black people.

When they say something racist, they have a Black fairy godfather like in the insurance commercials who appears out of nowhere when they find themselves in a heap of trouble.

White people, you know the time you told the Black girl how hot she is despite you not even being into Black girls.

Or the time you told your Black co-worker you like him because he’s Black but doesn’t act Black, which is code for you do not act like a thug.

Your very own Super Negro type hero can appear and get you out of the pickle you’ve just created for yourself.

Trust me, you do not want to be the “friend” that withholds all of this useful information from your peers.

And maybe, our kindness will be returned with a “Dear Black People” satire.  Wouldn’t that be awesome!

P.S. Click here for a full review of “Dear White People.”  The movie is now available on digital HD and On Demand, and the DVD and Blu-ray will be available Feb. 3.