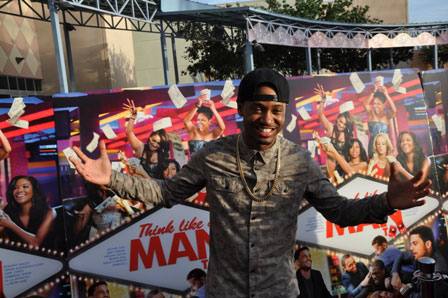 Many know that art imitates life.

Great stories on the big and small screen often stem from the ups and downs of real life.

However, art can also make one reassess one’s life.  Movie characters can even make the actors look back at their life and honor those that helped them make it to the verge of Hollywood greatness.

Actor and television personality Terrence J portrays Michael in the “Think Like a Man” franchise, and the character’s mama’s boy characteristics made the actor born Terrence Jenkins realize the importance of his own single mother.

His mother’s influence led to his memoir “The Wealth of My Mother’s Wisdom” and a special connection to the character he reprises in “Think Like a Man Too.”

RM: You were raised by a single mother, which is chronicled in your memoir.  We reviewed it for RegalMag.com and loved it.  How much did you pull from your real life with your mother for your character Michael and his relationship with Miss Loretta (Jenifer Lewis)?

TJ: You know what, the character Michael and being a mama’s boy was the inspiration for the book.  I have a great relationship with my mom.  After I played the character and I assessed how much my mom had an impact on my life and how it paralleled the character; that’s what made me write the book.

RM: What type of response have you gotten about the book?

TJ: Listen man, if I have one person, if I have a brother like you, that read the book and the book impacted you in any single way; that’s the only reason why I wrote it.  Any time you reach somebody that’s all it’s about.