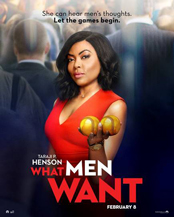 The hit song “Perfect Combination,” described two lovers that fit to a tee.

In Taraji P. Henson’s “What Men Want,” director Adam Shankman (“Being Mary Jane”) combines two classics in “What Women Want” and Jerry Maguire, and the pair also fits to a tee.

In “What Men Want,” Ali Davis (Henson, “Hidden Figures”) does not even have what she wants.

Sure she has a prolific career as a sports agent.

But as a woman, she is boxed out from truly succeeding as an agent and is constantly passed up for promotions to partner at her sports agency.

It is as if Ali was born to work in sports considering that she is named after the greatest boxer of all time, Muhammad Ali.

Her father Skip Davis (Richard Roundtree, “Shaft”) even owns his own boxing gym.

And his daughter frequently visits the gym to release her frustrations from the job and the dating scene.

Ali has even less luck with the opposite sex.

She has a hard time connecting with men and she is terrible in bed.

What makes matters worse for Ali is that sports agents who are more successful than her on the job surround her and secure all of the big name clients that Ali desperately wants to work with.

Ali gets passed on as a partner.

To top it off, her personal life makes her zero for three.

Her friends are all getting married or already happily married.

She is surrounded by everyone else’s happiness, causing depression for Ali.

As a part of her friend’s bachelorette party, Ali gets to have a session with a psychic known affectionately as Sister (Erykah Badu).

Sister wants to help Ali better understand men and better communicate with the opposite sex.

Therefore, she prepares Ali a potent elixir that not only helps Ali better understand men.

The concoction allows her to hear the inner thoughts of all men she comes in contact with.

While Ali sees her gift of hearing men’s minds as a curse, Sister sees it as a gift.

Sister believes that Ali should use her gift to put her in a better position to succeed in her male-driven occupation.

Almost overnight, Ali is a superstar in more ways than one.

She begins succeeding in relationships.

She begins succeeding on the job.

But will superficial success lead to real life failure is the question?

“What Men Want” gets off to a shaky start.

However, with peak performances by Henson, Morgan and most importantly Badu, “What Men Want” definitely will give comedy fans, sports movie fans and rom-com fans what they want in a feel-good movie.

Like Gill and Lattisaw would say, “What Men Want” is a perfect combination.

In Morgan’s role as super dad Joe “Dolla” Barry, the comedian channels his inner Lavar Ball to portray the quintessential overbearing parent who lives their dreams vicariously through their children even if it is to their child’s detriment.

Henson, as Ali, is her typical around the way girl fighter who will not take trash from anyone, male or female.

The sports agent will stop at nothing to achieve her goals.

Ethics are not necessary as she climbs the ranks in her profession.

And although “What Men Want” features an Academy Award nominated actress in Henson as its headlining star, and a comedic legend in Morgan, an R&B diva steals the show.

Sister provides “What Men Want” with its eccentric personality.

And who better to portray eccentric in “What Men Want” than one of the most peculiar stars in the music business, Badu.

Sister talks to herself.

And she also hears voices in her head.

And while most people who hear voices also hear the word crazy used to describe them, Sister hears the specific voices of Tupac Shakur and Joan Rivers in her hand.

Unfortunately, Shakur and Rivers do not get along, which can cause conflict in the head of the psychotic, correction, psychic, Sister.

Like all hustlers, Sister does not solely rely on her psychic powers to earn income.

The logic probably is if Sister’s psychic powers cannot solve someone’s problems, then the weed will definitely do the trick.

However, “What Men Want” also benefits from appearances by other non-movies stars.

The film does not solely rely on the star power of Badu.

But while the other athletes and former athletes only make brief appearances, Bosworth’s role has more depth to it and he does not do a terrible job.

But the actor that might get overlooked in “What Men Want” is Aldis Hodge (“Straight Outta Compton”) in his role as the bartender, Will.

Hodge is slowly but surely climbing up the ranks of African-American leading men after his performances in the film “Hidden Figures” and television series, “Underground.”

The bartender role in “What Men Want” is so profound because it shows a regular workingman taking care of his son as a single father.

“What Men Want” is refreshing because it portrays Will as a regular man just trying to do right by his son and trying to do the same by his woman.

However, “What Men Want” might borrow too much from “Jerry Maguire” for some critics.

While the combination of “Jerry Maguire” and “What Women Want” makes for a great combo, some people might not like the similarities because it might not be original enough for them.

But for RegalMag.com, the combination is not just good.

It is the perfect combination.